Share
Facebook Twitter LinkedIn StumbleUpon Tumblr Pinterest Reddit WhatsApp Telegram Share via Email Print
Share
By Humeyra Pamuk
Two security force members were killed and 24 were wounded in a suicide bombing attack overnight by the Kurdistan Workers Party (PKK) in Turkey’s eastern province of Agri, the local governor’s office said in a statement on Sunday.
The attack was carried out with a tractor loaded with two tonnes of explosives on a gendarmarie outpost located in the Dogubeyazit district of eastern Agri province, bordering Iran, the governor’s office said.
One soldier was also killed in Turkey’s southeastern province of Mardin when a military vehicle detonated a mine, local media reported. Eight soldiers were also wounded.
Armed attacks by PKK militants in southeastern Turkey have increased since mid-July, much more so since Turkey began a campaign of air strikes on PKK camps in northern Iraq on July 24.
In what prime minister Ahmet Davutoglu has called a “synchronized fight against terror”, Ankara has granted access of its bases to the U.S.-led coalition battling Islamic State, however so far the majority of Turkey’s air bombardment has been on PKK targets.
Turkish officials have said the strikes against the PKK are a response to increased violence. Sunday’s attacks have brought the number of security forces killed in attacks blamed on the PKK to at least sixteen, since July 20.
Western allies, including NATO and the United States, have supported Turkey’s actions but several have also urged it not to use excessive force or to let years of peace efforts with Kurdish militants collapse.
Turkish President Tayyip Erdogan initiated negotiations in 2012 to try to end the PKK insurgency, largely fought in the predominantly-Kurdish southeast and which has killed 40,000 people since 1984. The ceasefire, though fragile, had been holding since March 2013.
On Tuesday, Erdogan said the process had become impossible and urged parliament to strip politicians with links to the militants of immunity from prosecution.
The leader of Turkey’s pro-Kurdish opposition has accused Erdogan of launching air strikes in Syria and Iraq to prevent Kurdish territorial and political gains, and of using the war against Islamic State as a cover. 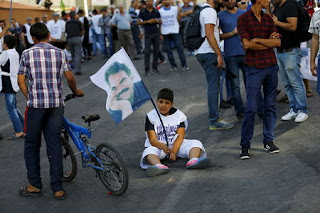