Share
Facebook Twitter Google+ LinkedIn StumbleUpon Tumblr Pinterest Reddit WhatsApp Telegram Share via Email Print
Share
By Mohammed Mukhashaf
Yemeni vice president Khaled Bahah arrived in the southern port city of Aden on Saturday, the most senior official from Yemen’s exiled government to visit since local fighters drove out the Iranian-backed Houthis.
Airport officials said Bahah, who is also prime minister, was accompanied by six ministers when he flew in from the Saudi capital Riyadh, where the Yemeni government had been based since President Abd-Rabbu Mansour Hadi fled a Houthi advance on Aden in March.
Since then, hundreds have been killed in fierce clashes between pro-Hadi fighters, backed up by air strikes from a Saudi-led Arab alliance, and the Houthis, who have struck an alliance with supporters of former President Ali Abdullah Saleh.
Bahah’s visit became possible after fighters from the southern Popular Resistance drove the Houthis out of Aden two weeks ago, a major setback for the group which has been on the offensive since seizing control of the capital Sanaa last September.
Bahah told journalists at Aden airport that his trip was “part of the liberation of Aden and part of the normalization of life in it,” according to al-Arabiya television’s website.
There were conflicting reports on the duration of Bahah’s visit: Sources close to him said he planned to return to Saudi Arabia in the evening, but his government’s sabanew.net news agency suggested he would remain in the city.
He and the six ministers would pursue their duties from Aden and would oversee government relief efforts, the agency said.
Yemen’s warring parties in June failed to reach agreement at U.N.-sponsored peace talks in Geneva to end the fighting that has killed around 4,000 people since March. Fresh efforts by the U.N. special envoy to Yemen to broker further talks have so far been unsuccessful.
The Houthis, who follow the Zaydi branch of Shi’ite Islam and fought several wars against Saleh before he was ousted in a popular uprising in 2011, say they are fighting al Qaeda and that they want to root out government corruption.
But Saudi Arabia, the world’s largest oil exporter and a key regional ally of the United States, says the Houthis are a proxy for Shi’ite power Iran.
FOOD AID YET TO BE DISTRIBUTED
Aden residents were anxious to see Bahah’s visit as a sign that conditions were going to improve in the city, where streets are littered with debris and garbage is piling up.
“We need to see some progress toward restoring normality to the city,” said Khaled Mirshed, a resident of Aden.
The city’s population has suffered severe shortages of electricity, water and cooking gas and some residents were using firewood to cook.
There are also complaints among residents that food shipments from Gulf Arab neighbors had yet to be distributed.
Outside Aden, clashes between the Houthis and Popular Resistance fighters continued.
In Dhalea, a province north of Aden, 18 Houthi fighters were killed in clashes with Resistance forces, while six others were captured, the Sabanew.net news agency said.
The Houthi-run Saba news agency in Sanaa said Saleh loyalists and the Houthis had consolidated their hold on some Saudi military outposts in the southern part of the kingdom, where cross-border fighting also continues.
It was not immediately possible to confirm the reports of the rival news agency. 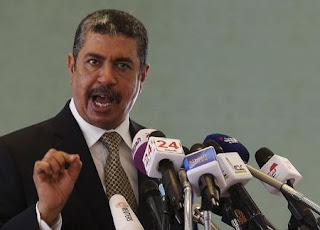