Share
Facebook Twitter LinkedIn StumbleUpon Tumblr Pinterest Reddit WhatsApp Telegram Share via Email Print
Share
A seven-day sacred traditional oro festival known has been declared in Ile-ife, Osun State.
According to traditionalists, during the period of the festival‎, residents of the ancient town, especially women must not stay outaside beyond 7.00 p.m.
Meanwhile, major markets in the ancient town remain opened, as commercial and economic activities continued.
Also, the Ooni palace at Enuwa was devoid of the usual human and vehicular traffic, except for the presence of the private guards and about four police men manning the gates of the palace.
Though the reason for the declaration of the oro festival was not known, but informed sources believed it might be in connection with the alleged death of the traditional ruler of the town, the Ooni of Ife, Oba Okunade Sijuwade, which his chiefs have continued to dismiss and described as mere rumour.
Preferring anonymity, the sources said that whoever violates the traditional order of the oro festival might have himself to blame for a dire consequence.
According to the sources, traditionalists would use the period of the festival to appease the gods and perform necessary rituals that would make the town to enjoy peace and also avert looming danger in Ife and its environs.
The sources, however, disclosed that the festival had nothing to do with the alleged death of the Ooni.
They also claimed that this year edition of the festival only coincided with the “rumoured death” of the town’s monarch.
To prove that Oba Sijuwade is alive, they said: “There is a door that remained closed during the life time of a sitting monarch, and since the door remained closed, it means that the monarch is presumed to be alive.
“The closure of markets to business and ringing of a special bell to announce the death of the monarch are two major significant signs to show that a monarch has joined his ancestors and these are yet to be done.” 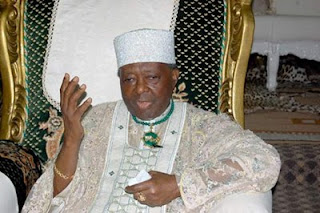