Share
Facebook Twitter LinkedIn StumbleUpon Tumblr Pinterest Reddit WhatsApp Telegram Share via Email Print
Share
The day the New York Yankees decided to stand pat at the trade deadline, they sent a message to the rest of the American League on Friday night at U.S. Cellular Field that they’re still thinking big this season.
After general manager Brian Cashman told reporters his current roster would have to be enough, along with help from the farm system, the Yankees got a great effort from one of their veterans in a 13-6 victory to begin a series against the Chicago White Sox.
First baseman Mark Teixeira had a banner night to lead the charge, going 3-for-4 and smacking two long home runs to center field for six RBIs, including a grand slam in the second inning for a 6-0 lead against rookie left-hander Carlos Rodon. It was his second game in a row with two homers.
“It’s been good since the All-Star break,” Teixeira said of his rhythm at the plate. “The two days off since the break really helped. (I’m) just seeing the ball real well right now and the bat’s feeling quick and (I’m) getting some good pitches to hit.
Right fielder Carlos Beltran (3-for-4) and infielder Brendan Ryan (3-for-6) also finished with three hits, while four other Yankees had multi-hit games.
Rodon (4-4) took the loss after allowing eight earned runs on eight hits in three-plus innings. Right-hander Nathan Eovaldi (11-2) earned the win by pitching 5 2/3 innings and allowing three runs on seven hits. White Sox designated hitter Adam LaRoche tied a career high with four hits (4-for-5, RBI) and also pitched a scoreless ninth — striking out Ryan for the third out.
The win ended a two-game losing skid for the Yankees (58-44), who are leading the American League East. It was a deflating loss for the White Sox (49-52), who lost for the second time in as many days after also opting not to make a trade prior to the deadline. Asked if the lack of trades might have caused his team to come out flat, Chicago manager Robin Ventura shot that theory down quickly.
“Just because we didn’t trade for anybody?” Ventura said. “No, that’s not it. We just got beat in a game and that’s part of it. That has nothing to do with (Thursday’s loss) or at (the deadline) today.
It didn’t take the Yankees long to spoil Rodon’s outing and take a commanding lead. After scoring a run on two doubles in the first, they made it 6-0 with five runs in the second on five hits, including Teixeira’s slam.
Rodon allowed back-to-back singles by catcher John Ryan Murphy and Ryan to start the inning, but fell into trouble after they were sacrificed to second and third. He got center fielder Jacoby Ellsbury to line out for the second out, holding Ryan at third, but control issues loaded the bases on one of his four walks. Designated hitter Alex Rodriguez got a run-scoring infield hit and Teixeira followed with the blast to clear the bases.
“(It’s) just location (with Rodon) and this is a tough team to do that against,” Ventura said. “They’re a veteran group and I think that’s part of it tonight. They worked it and got some pitches that they could handle and did a number on them.
Eovaldi allowed two runs in the third on a two-run homer by Chicago first baseman Jose Abreu, but got five more runs of support on another five hits by his teammates in the Yankees’ half of the fourth — again highlighted by a Teixeira homer.
Once again, Teixeira went deep over the center-field wall, with the only difference being the pitcher who threw the pitch — right-hander Matt Albers, who relieved Rodon in the fourth with no outs. That homer gave the slugger back-to-back two-homer games and set a major league record for the switch-hitting Teixeira, who has homered from both sides of the plate in the same game 14 times
Chicago added a run in the fifth to make it 11-3, but the Yankees were still eight runs ahead. Ryan’s at-bat in the ninth against LaRoche was the biggest highlight in the remaining four innings. After throwing a couple slow curveballs, LaRoche pumped a high fastball in at 85 miles per hour, which Ryan missed for the third strike.
“I had no chance on that one,” Ryan said, laughing. “I tried to get to it, but after the 50 (mph) whatever it was, it looked like 110. Oh well. Kind of fits, right, with the mustache? That’s the kind of at-bat I feel like I should have, I don’t know. Ridiculous.” 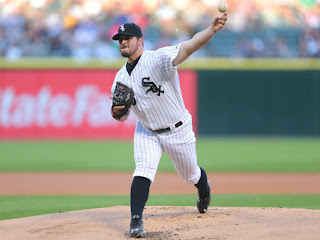