Share
Facebook Twitter LinkedIn StumbleUpon Tumblr Pinterest Reddit WhatsApp Telegram Share via Email Print
Share
Shares in telecom network gear makers Nokia and Alcatel-Lucent jumped on Thursday after both posted strong second-quarter results, giving a positive signal ahead of their pending merger.
Nokia’s 15.6 billion euro ($17 billion) acquisition of Alcatel-Lucent announced in mid-April aims to position the company to better compete with market leader Ericsson and low-cost Chinese powerhouse Huawei [HWT.UL], by forging a strong number two in mobile with a more complete product line.
But with competition in the sector remaining intense and demand from telecom operators soft, some investors still have concerns about the marriage.
Analysts warn competitors may exploit any uncertainty among customers created by the merger. The deal is supposed to be completed by mid-2016, although Alcatel-Lucent hinted that closing could come earlier since some key regulatory approvals had already been secured.
Shares of Nokia surged 7.8 percent while Alcatel gained 5.7 percent, having slumped 20 percent and 27 percent respectively in the past three months against a 20 percent fall for Ericsson.
Analyst Alexander Peterc at Exane BNP Paribas, with a “buy” rating on both, said the results boded well for the takeover.
“Nokia’s quarter was much better than expected on the operating margin and Alcatel’s performance was good as well,” Peterc said. “There are no signs that the financial results of the companies are diverging in Alcatel-Lucent’s favor, so there is little chance that the terms of the deal are renegotiated.”
A handful of Alcatel-Lucent investors including third-largest holder Odey Asset Management had called for better terms after its first-quarter results were markedly better than Nokia.
But few expect this to succeed since the deal is structured as a tender offer, requiring only a majority of Alcatel shareholders to be willing to sell.
SOFTWARE SALES
Alcatel-Lucent holders will get 0.55 shares in Nokia for every Alcatel-Lucent, ending up with 33.5 percent of the enlarged group.
In the second quarter, Nokia, the world’s No. 3 telecom network equipment maker, posted a surprise rise in profits and margins, helped by lucrative software sales and a refusal to chase lower-margin contracts.
Alcatel-Lucent’s second-quarter sales were slightly lower than expectations but operating profit and margins topped consensus, as a focus on cost cuts offset weaker U.S. demand.
Also encouraging was double-digit growth in products that help telecom operators direct internet traffic, as well as the fact that Alcatel-Lucent generated more cash than it consumed for the first time since 2006.
Gartner analyst Sylvain Fabre said the results boded well for the marriage. “The consolidation of their two product lines will be long and painful, but at least they will be beginning the effort with both companies in a relatively healthy place.”
Much will hinge on how the telecom gear market performs for the rest of the year. Nokia chief Rajeev Suri said demand in emerging markets was strong, especially India, the Middle East and Africa, while Japan, Europe and North America were weaker. The lucrative U.S. market, a major driver of Alcatel-Lucent sales and profits, had got off to a slow start this year as operators like Verizon and AT&T curtail spending. But Alcatel-Lucent saw an uplift in sales there in the second half. 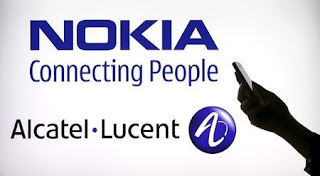