Share
Facebook Twitter LinkedIn StumbleUpon Tumblr Pinterest Reddit WhatsApp Telegram Share via Email Print
Share
By Victoria Cavaliere
A rapidly spreading brushfire burning in parched timberland north of San Francisco has forced the evacuation of 500 people and destroyed several buildings less than 12 hours after it broke out, fire officials said on Thursday.
The blaze, named the “Rocky Fire”, is one of a string of wildfires threatening homes and scorching parched wilderness in the U.S. West, where several regions have endured sustained drought.
The Rocky Fire broke out Wednesday afternoon in Lake County, 110 miles (180 km) north of San Francisco. By early Thursday it had covered 3,000 acres (1,200 hectares), according to the California Department of Forestry and Fire Protection (CalFire).
The agency said the fire was spreading rapidly through heavy brush and timberland. Rugged terrain made access difficult for firefighters.
The blaze has destroyed several outbuildings and mandatory evacuation orders were issued to about 500 people, CalFire said.
Smoke from the blaze has been seen up to 80 miles (130 km) to the south in Napa, one of the state’s famed wine-making regions, where another blaze burning for a week forced the evacuation of 200 people on Wednesday.
The 7,500-acre (3035 hectares) “Wragg Fire,” burning near Lake Berryessa, the largest lake in Napa County, was 80 percent contained, fire officials said.
North of Sacramento, the 2,300-acre (930 hectares) Lowell Fire threatened 1,550 structures, mostly homes and other residential buildings, CalFire spokesman Daniel Berlant said.
One small structure has been destroyed and six people hurt, including one firefighter with serious injuries, CalFire said.
About 10 blazes were active in California, which is in its fourth year of record drought, according to fire officials.
To the north, in Washington state, a 6,000 acre (2,400 hectare) blaze that erupted on Monday was burning 10 miles east of Walla Walla, a city of about 32,000 people, according to the U.S. Forest Service’s InciWeb online fire information center. 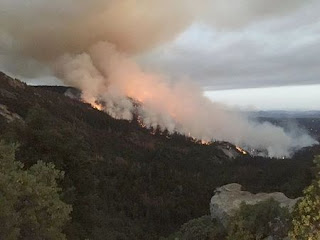