Share
Facebook Twitter LinkedIn StumbleUpon Tumblr Pinterest Reddit WhatsApp Telegram Share via Email Print
Share
By Humeyra Pamuk
ISTANBUL (Reuters) – The folded piece of paper with a photo of a four-month-old baby tells a story that will loom over Turkish President Tayyip Erdogan and his Chinese hosts when he visits Beijing this week.
Baby Arife is a Uighur, one of thousands of members of China’s Turkic language-speaking Muslim ethnic minority who have reached Turkey, mostly since last year, infuriating Beijing, which accuses Ankara of helping its citizens flee unlawfully.
Turkish officials deny playing any direct role in assisting the flight. But the document, labeled “Republic of Turkey Emergency Alien’s Travel Document” suggests otherwise.
Arife’s mother, Summeye, 35, says she was given it, along with documents for herself and her three other children, by a diplomat at the Turkish embassy in Kuala Lumpur, which she reached after a nine day journey transported by people smugglers through Cambodia, Vietnam and Thailand.
The document, valid only for travel to Turkey, lists the baby’s place of birth as Turpan, a city in China’s western Xinjiang region. Under “nationality”, it says “East Turkestan”, the name Uighur activists and their Turkish supporters give for their Chinese-ruled homeland.
Other Uighurs in Istanbul told Reuters they too had reached Turkey last year through a similar route, hiring people-smugglers to escape China and receiving travel documents on the way.
The issue is an uncomfortable one for Ankara, which says it is open to valid asylum claims by victims of repression who reach its territory, but denies acting abroad to assist the exodus of Uighurs that surged last year. Representatives of Turkey’s Foreign Ministry said they were not immediately able to comment on the temporary travel document seen by Reuters.
Tong Bishan, a senior Chinese police officer helping to lead Bejing’s efforts to get Uighurs returned, said the issue of Turkey providing travel documents at embassies in southeast Asia has been raised “at high levels”.
“The general attitude of the Turkish government has been not bad,” he told reporters this month. “But what we have seen is that employees at Turkish embassies have been providing help.”
“ALLOW US TO LIVE AS MUSLIMS”
Uighurs fleeing China say they are escaping repression by the Chinese authorities.
“They don’t allow us to live as Muslims,” said another Uighur refugee, also named Sumeyye, who fled to Turkey last October with her three children and lives in the basement of a working-class housing block in Istanbul.
“You can’t pray. You can’t keep more than one Koran at home. You can’t teach Islam to your children. You can’t fast and you can’t go to Hajj. When you’re deprived of your whole identity, what’s the point?” she said, speaking through a translator and covered from head to toe in a chador.
Nationalist Turks regard the Uighurs as ethnic kin in peril and believe their government should do more to help them.
Earlier this month, when Thailand’s military rulers, under pressure from Beijing, forcibly deported nearly 100 Uighurs back to China, protests erupted in Turkey. The Thai consulate in Istanbul was stormed. There were reports of attacks on Chinese restaurants and east Asian tourists. A Chinese orchestra canceled a concert.
In an apparent bid to placate Beijing, Erdogan said the unrest might have been aimed at damaging his trip, when he plans to raise the Uighurs’ plight.
China denies it represses the Uighurs and says their freedom of religion is respected. It accuses a group called the East Turkestan Islamic Movement (ETIM) of waging an increasingly violent campaign for an independent state in Xinjiang and says it is recruiting followers to train in the Middle East.
“A lot of these people are victims. We don’t want to see them going to Turkey to become cannon fodder, to become new recruits for the terrorists,” said Tong, the Chinese police chief.
Uighurs themselves acknowledge that some members of their community have crossed from Turkey to fight alongside Islamic State militants in Syria, but say this is a small minority.
“These militants lure them, saying they will help them train for the Uighur cause, they will give them weapons and they will support them against China,” Uighur refugee Adil Abdulgaffar, 49, said in his apartment in Istanbul’s working-class Sefakoy district, next to a bookshelf filled with Muslim prayer books.
“I’ve known of people who have gone off to Syria from Turkey with hopes that these promises will come true. But I also know that they very much regret it and would like to come back,” he said. “Our brothers who have been battling for their existence for the past 50 to 60 years are longing for guns. They are also very naive, and open to being tricked.”
About 1,000 Uighurs are housed in a gated complex once used by the Turkish finance ministry in the conservative city of Kayseri in central Turkey, guarded by police.
The apartments, spread across around ten 5-storey blocks, are spacious but sparsely furnished. Two large flags hang from one of the top floors, one the red Turkish flag, the other the blue flag of East Turkestan. One apartment is used as a Koranic school for young boys.
Many of the residents told stories of persecution in China and arduous journeys out, paying smugglers thousands of dollars to evade onerous travel restrictions imposed by Beijing.
“For these traffickers, Uighurs mean money, Uighurs mean cash. If you are Vietnamese … they charge $1,000, but when you are Uighur the price goes up five-fold, sometimes ten-fold,” said 54-year old Erkin Huseyin.
He said he had left Xinjiang in early 2014 after being told his brother, sick and imprisoned without trial since 1998, would not be allowed to see a doctor and would not leave jail alive.
“We were born into a life of oppression,” said another refugee, Omar Abdulgaffar, 44. “Our parents have gone through this and I thought…why should my children go through it too? So we escaped.” 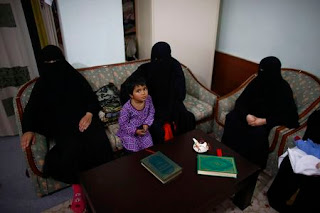