Share
Facebook Twitter LinkedIn StumbleUpon Tumblr Pinterest Reddit WhatsApp Telegram Share via Email Print
Share
Romania rebuked Hungary’s prime minister on Monday for posting on his Facebook page symbols it said suggested Budapest favors autonomy for Romanian territory populated mainly by ethnic Hungarians, calling such “revisionism” unacceptable.
Ethnic Hungarians are the largest minority in Romania and live above all the Black Sea’s Transylvania region, which was part of Hungary until it was ceded by treaty to Bucharest following World War One.
This has often caused friction between the two European Union neighbors with tensions flaring occasionally over the public use of ethnic minority flags.
Hungarian Prime Minister Viktor Orban visited Transylvania on Saturday to deliver an annual speech outlining his political vision for the near future. Afterwards, the right-wing premier posted photos of metal emblems and wood-engraved badges with maps, flags and heraldry of “Greater Hungary” on sale in Transylvania, using the tag: “For us, it’s Europe at stake.”
(https://www.facebook.com/orbanviktor/photos_stream)
Romania’s Foreign Ministry, in a Facebook response, said:
“Unfortunately, only one day after he called for pragmatism and was in favor of an ‘efficient’ Romanian-Hungarian relationship, Prime Minister Orban chose to post … images including symbols of Greater Hungary…
“Promoting these revisionist symbols personally by the prime minister is completely unacceptable,” it said.
Orban spokesman Bertalan Havasi told Hungarian state news agency MTI that the photos depicted solely “historical symbols”.
“It cannot really be questioned that these are relics related to Hungarian history,” government spokesman Zoltan Kovacs told Reuters. “Why is this a problem? We don’t really understand.”
The map of Greater Hungary, which depicts the country before large swathes of its territory were lopped off in the 1920 Treaty of Trianon, is a recurring icon at far-right rallies in Hungary and many motorists feature it as bumper stickers.
In his speech Orban, whose Fidesz party has lost some support to the far-right opposition Jobbik party over the past year, drew a link between illegal migrants heading to Europe and a rising threat of terrorism. He said this justified his government’s tough anti-immigration stance. [ID:nL5N10505J]
Romania is home to some 1.3 million ethnic Hungarians in a total population of 20 million.
Many ethnic Hungarians want a greater autonomy in running their affairs. Their main political grouping, the Democratic Union of Hungarians (UDMR), has been represented in Romania’s parliament with about 6 percent of seats since 1990. 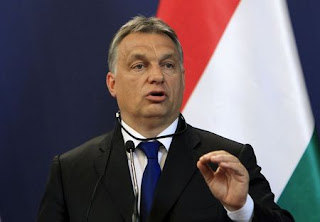