Share
Facebook Twitter LinkedIn StumbleUpon Tumblr Pinterest Reddit WhatsApp Telegram Share via Email Print
Share
By Esme Bright
(Thomson Reuters Foundation) – American World Cup champion Alex Morgan will be one of two women soccer players to score a first by featuring on the front cover of FIFA, the world’s most popular soccer video game, the game’s publisher said on Tuesday.
Morgan, 26, helped bring the U.S. soccer team victory against Japan in the 2015 Women’s World Cup final earlier this month.
The forward will be pictured on the U.S. version of FIFA 16 alongside Barcelona’s Lionel Messi, EA Sports said. A Canadian version of the game will feature Messi and Canada’s captain, Christine Sinclair.
EA Sports unveiled plans in May in the lead-up to the Women’s World Cup to include women in the FIFA videogame franchise for the first time. Only men’s teams had featured in the game since it was first released in 1993.
Morgan said it was an honor to be one of the faces of the 12 international women’s teams which will play in FIFA 16 and include England, Germany, the United States and Brazil.
“I know people all over the world play this game and I’m really excited that FIFA 16 is putting such an important spotlight on women’s soccer,” Morgan said in a statement.
FIFA is the world’s most popular soccer video game and the latest installment, FIFA 15, sold more than 16 million copies, according to video game research firm VG Chartz.
The Women’s World Cup, played in six cities across Canada, put the spotlight on the women’s sport, which is gaining in popularity but still lags far behind men’s soccer.
For example, FIFA invests about $900 million a year in soccer projects around the world but only 15 percent of that goes to women’s soccer, Mayrilian Cruz-Blanco, FIFA’s senior women’s soccer developing manager, told a recent news conference.
Morgan was in the USA women’s team which won an Olympic gold medal at the 2012 London Games after beating Japan 2-1. Sinclair won her first Olympic medal that year, receiving bronze as a member of Canada’s Women’s soccer team. 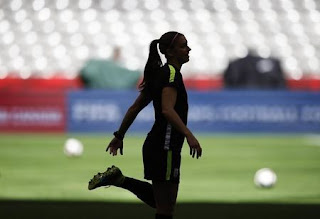