Share
Facebook Twitter LinkedIn StumbleUpon Tumblr Pinterest Reddit WhatsApp Telegram Share via Email Print
Share
More than 865,000 people have been evacuated from China’s eastern province of Zhejiang ahead of Saturday’s expected landfall of Typhoon Chan-Hom, state news agency Xinhua said.
The typhoon, packing winds of up to 173 kph (108 mph), may be the most powerful to hit Zhejiang in July since the Communist Party took power in 1949, the National Meteorological Center said.
It will bring heavy rain to parts of China, including the commercial capital of Shanghai and the eastern provinces of Anhui, Fujian, and Jiangsu, besides Zhejiang, the weather service said.
Besides the closure of schools and the suspension of flights and trains, 29,000 ships have returned to port, Xinhua said, citing local authorities.
Typhoons are common at this time of year in the South China Sea, picking up strength from the warm waters before dissipating over land.
Earlier this week, typhoon Linfa moved slowly across the north of the Southeast Asian archipelago and up to China’s southern province of Guangdong. 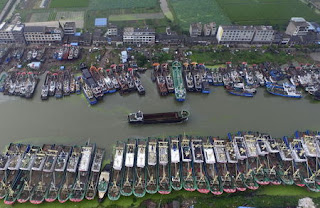 Explosion in Nigerian city of Maiduguri