Share
Facebook Twitter LinkedIn StumbleUpon Tumblr Pinterest Reddit WhatsApp Telegram Share via Email Print
Share
A U.S. appeals court affirmed a lower court decision to strike down Puerto Rican legislation aimed at granting local municipalities the right to enter bankruptcy, but one judge in a concurring opinion said excluding the U.S. territory’s public entities from federal bankruptcy law was unconstitutional.
Puerto Rico passed the so-called Recovery Act last year to give certain public corporations, with around $20 billion in debt, the ability to restructure financially in an orderly process. Puerto Rico is currently struggling with a total debt load of around $72 billion, which it says it is unable to pay.
“Besides being irrational and arbitrary, the exclusion of Puerto Rico’s power to authorize its municipalities to request federal bankruptcy relief should be re-examined in light of more recent rational-basis review case law,” Judge Juan Torruella, said in the ruling late on Monday.The Recovery Act was struck down by a federal court in Puerto Rico in February after bondholders in the island’s power authority, including Franklin Advisers, OppenheimerFunds and Blue Mountain Capital, argued in a law suit that the legislation contravened the U.S. bankruptcy code, which expressly excludes Puerto Rico. While the 49-page ruling ostensibly vindicates the bondholders’ position, the one judge’s concurring opinion also makes a forceful case that Puerto Rico should be given access to Chapter 9 of the U.S. bankruptcy code, which deals with municipal bankruptcies. Bondholders have consistently opposed this view.
The in-depth opinion, steeped in legislative history, may strengthen the case for Congress to act on a bill, currently before a House committee, that seeks to change Chapter 9 to treat Puerto Rico like any other state for the purposes of bankruptcy.
(The story corrects headline to remove phrase “slams exclusion,” which was part a concurring opinion; fixes paragraph one to clarify that comments on Chapter 9 were from one judge in a concurring opinion; in paragraph three corrects attribution of the quote to one judge from the full court; in paragraph five corrects the length of the ruling to 49 pages from 75 and clarifies the concurring opinion was from one judge; in last paragraph corrects “ruling” to “opinion” and “will” to “may”) 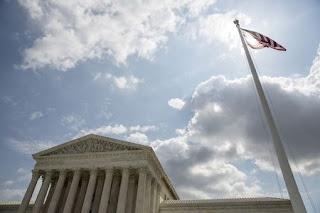