Share
Facebook Twitter LinkedIn StumbleUpon Tumblr Pinterest Reddit WhatsApp Telegram Share via Email Print
Share
German Vice Chancellor Sigmar Gabriel criticized Britain on Tuesday for not taking part in a European plan to share the burden of taking in desperate people fleeing war and poverty in North Africa and the Middle East.
European leaders last month agreed a voluntary scheme to take in 60,000 asylum seekers but Britain has a long-standing exemption from EU rules on border issues, along with Ireland and Denmark. The leaders also agreed to excuse Hungary and Bulgaria.
Gabriel, leader of the Social Democrats (SPD), junior partner in Germany’s ruling coalition, defended Berlin’s record on taking in asylum seekers during a town hall-style question and answer debate with voters in the eastern city of Magdeburg.
“I think you could say ‘I think the Germans are doing better at the moment than many others, though perhaps not well enough’,” he said during a heated exchange with one questioner.
“Great Britain has said ‘we are happy to send ships, but we won’t take a single asylum seeker’,” Gabriel added. “I think we should rail against the British and not ourselves.”
In the first five months of 2015, nearly 142,000 people applied for asylum in Germany, Europe’s biggest economy, a 127 percent increase on the previous year, interior ministry figures show.
The migrant crisis inflames political passions across the continent, with EU ‘frontline’ states such as Italy and Greece complaining of what they see as a lack of solidarity and support from other countries. Anti-migrant sentiments have fed support for far-right parties in many EU countries.
At a June summit, fractious European leaders argued into the early hours about how to handle the crisis in the Mediterranean — where thousands have died trying to cross by boat from Africa to Europe — before agreeing on the voluntary scheme. 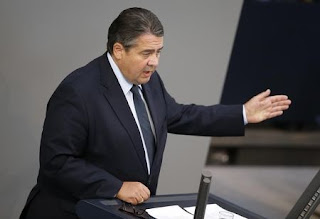