Share
Facebook Twitter LinkedIn StumbleUpon Tumblr Pinterest Reddit WhatsApp Telegram Share via Email Print
Share
China has completed some of its land reclamation on the Spratly Islands in the South China Sea, the Foreign Ministry said on Tuesday, raising the stakes in Beijing’s territorial dispute with its Asian neighbors.
China stepped up its creation of artificial islands last year, alarming several countries in Asia and drawing criticism from Washington. The United States, which has called for a halt in China’s island building, said earlier this month that it was concerned about Beijing’s plans for more construction work, including for military defense.
China’s Foreign Ministry spokeswoman Hua Chunying said at a daily briefing that the land reclamation projects on some islands and reefs in the South China Sea had been completed “in recent days”.
China had been working on land reclamation projects on seven reefs among the tiny islets at the center of the maritime territorial dispute involving the Philippines, Vietnam, Malaysia, Taiwan and Brunei.
Recent satellite images have shown a hive of work on China’s new islands. U.S. officials say China has reclaimed 1,500 acres of land this year alone.
The spokewoman did not specify where the land reclamation had been completed.
“As for the next step, China will begin fulfilling the relevant functions of the facilities,” Hua said.
“The construction is mainly to provide services to meet civilian demands so as to better facilitate China’s efforts at maritime search and rescue, disaster prevention and reduction, maritime research, meteorological observation, environmental protection, safety of navigation, fishery services and so on, in keeping with (our) international responsibilities and obligations,” she said.
“Certainly, our relevant construction will also include satisfying the necessary military defense needs,” she added.
China claims most of the South China Sea, through which $5 trillion in ship-borne trade passes every year.
Military facilities under construction include a 3,000-metre (10,000-foot) runway and airborne early warning radars, which could be operational by the year-end, according to one U.S. commander. 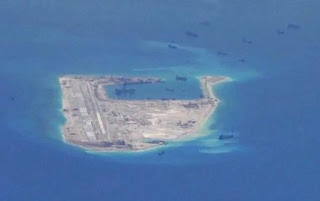 Bank of Japan Kuroda: wants to coordinate with overseas officials