Share
Facebook Twitter LinkedIn StumbleUpon Tumblr Pinterest Reddit WhatsApp Telegram Share via Email Print
Share
By Clement Manirabarusha
Burundians voted for a new parliament on Monday, the first in a series of elections boycotted by the opposition after weeks of protests and violence triggered by President Pierre Nkurunziza’s decision to seek a third term in office.
Gunshots echoed around the capital Bujumbura, the center of opposition rallies against Nkurunziza and his government, overnight before voting began. Many polling stations opened late, witnesses said.
Despite mounting international criticism, the government has pressed on with the parliamentary vote and its plan for a presidential race on July 15, amid the deepest political crisis since an ethnically charged civil war ended in 2005.
More than 125,000 people, or more than 1 percent of the nation’s 10 million population, have fled across the border, worrying a region with a history of ethnic conflict, particularly next-door Rwanda which suffered genocide in 1994.
Demonstrators say Nkurunziza is violating the constitution by seeking a third term. The president cites a court ruling saying he can run and has refused to back down, prompting opposition parties to say they would boycott all the polls.
Aimable Niyonkuru, 20, once a supporter of Nkurunziza’s CNDD-FDD party, said he would not vote in Monday’s vote for parliament and local councils because the president had not improved the economy or delivered on other promises.
“I am really disappointed about what all politicians are doing, I think that they are not patriotic,” he said.
He was speaking in Bujumbura, the scene of frequent clashes between police and protesters since late April, when the president said he would seek another five-year term.
African states and Western donors had called for dialogue and a delay to voting, already pushed back several weeks due to the unrest, demanding the media was allowed to operate freely and other steps to ensure a fair vote.
The African Union said on Sunday it would not send observers as it did not believe voting would be free or fair. The United States and European Union nations have withheld some aid and threatened sanctions on those behind the violence.
The weeks of unrest that killed dozens of people has remained largely confined to the capital with only sporadic demonstrations in other urban centers.
Nkurunziza, who once led a rebel faction of the majority Hutu ethnic group against minority Tutsis during the civil war, has been counting mainly on his powerbase in rural regions. 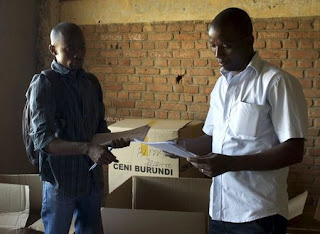