Share
Facebook Twitter LinkedIn StumbleUpon Tumblr Pinterest Reddit WhatsApp Telegram Share via Email Print
Share
Center fielder Juan Lagares hit a three-run homer in the sixth inning Sunday to cap a stunning comeback by the New York Mets, who went on to beat the Atlanta Braves 10-8 at Citi Field,
The Mets trailed 4-1 in the second inning and 8-3 in the fourth before producing their biggest come-from-behind victory of the season. The win ensured New York (34-30) would remain at least a half-game ahead of the Washington Nationals in the National League East.
The Braves (30-33) have lost three of four.
The Mets trailed 8-7 when their sixth-inning rally began with singles by pinch-hitter Michael Cuddyer and right fielder Curtis Granderson against left-hander Luis Avilan (2-2). Lagares homered three pitches later.
Right-hander Sean Gilmartin (1-0), the third of six pitchers used by the Mets, earned his first major league win with two hitless innings of relief. Right-hander Jeurys Familia notched his 19th save after allowing one hit in 1 1/3 innings.
The two teams combined for 28 hits. Every position player starter had at least one hit except Braves shortstop Andrelton Simmons, who had four hits Saturday.
Lagares and Braves second baseman Jace Peterson each missed the cycle by a triple while Granderson, Braves left fielder Kelly Johnson and Braves third baseman Juan Uribe also had three hits each.
The Braves scored in each of the first four innings against Mets right-hander Dillon Gee. Peterson singled and scored the Braves’ first run in the first and laced a three-run homer in the second.
Johnson had an RBI single in the third. In the fourth, Peterson doubled with one out to start a three-run outburst that included RBI hits by right fielder Nick Markakis, Uribe and Johnson.
But the Mets had little trouble responding against Braves right-hander Mike Foltynewicz. New York scored once in the first, when Granderson and Lagares singled before Granderson raced home on a wild pitch, and twice in the third on a two-run single by shortstop Wilmer Flores.
Left fielder Darrell Ceciliani and second baseman Dilson Herrera hit solo homers in the fourth to pull the Mets within 8-5. A one-out single in the fifth by Lucas Duda chased Foltynewicz, and catcher Travis d’Arnaud greeted right-hander Brandon Cunniff with a two-run homer.
Gee gave up eight runs (tying a career high) on 11 hits and one walk while striking out four over 3 2/3 innings.
Foltynewicz surrendered six runs (five earned) on nine hits and one walk while striking out three over 4 1/3 innings. 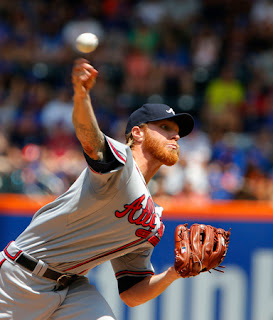 Airbus in advanced talks with SMBC for 30 A320neo jets