Qatar has made little progress improving migrant workers’ rights, despite promises to do so, the rights group Amnesty International has said.
The working and housing conditions of migrant construction workers have been heavily criticised.
Amnesty has been monitoring conditions in the run up the 2022 World Cup but says progress has been limited in some areas, non-existent in others.
Qatar insists major changes will be in place by the end of the year.
The report comes as two sponsors of the football tournament, Visa and Coca-Cola, voiced concerns over migrants workers’ rights.
An estimated 1.5 million migrants work in Qatar, many on the construction boom fuelled by Qatar’s successful bid to host the World Cup.
‘Public relations stunt’
Amnesty says a promise from Qatar last year to change the system under which workers have to seek permission from their employers to leave the country or change jobs has not been met.
It says the one change to labour laws that has been brought, a wage protection system to ensure workers are properly paid, is being implemented slowly.
One migrant told Amnesty he had not been paid since arriving in Qatar five months ago.
“I just want to work and earn some money for my wife and children, but because of my sponsor I can’t change jobs,” he said.
“Qatar is failing migrant workers,” said Mustafa Qadri, Amnesty’s Gulf migrant rights researcher.
Media captionMark Lobel reports: ”Our arrest was dramatic – eight cars drove us off the road”
“Without prompt action, the pledges Qatar made last year are at serious risk of being dismissed as a mere public relations stunt to ensure the Gulf state can cling on to the 2022 World Cup.”
The report said football’s governing body Fifa had a “clear responsibility” to put pressure on Qatar to do more.
But Qatar’s Labour Minister, Dr Abdullah al-Kulaifi, said the Gulf state was using the World Cup as a catalyst for change, and was 90% sure the amendments to labour laws would come in by the end of this year.
Meanwhile, World Cup sponsors Visa said it had expressed “grave concern” to Fifa over workers’ conditions, while another sponsor, Coca-Cola, said it “does not condone human rights abuses”. 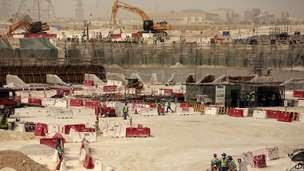