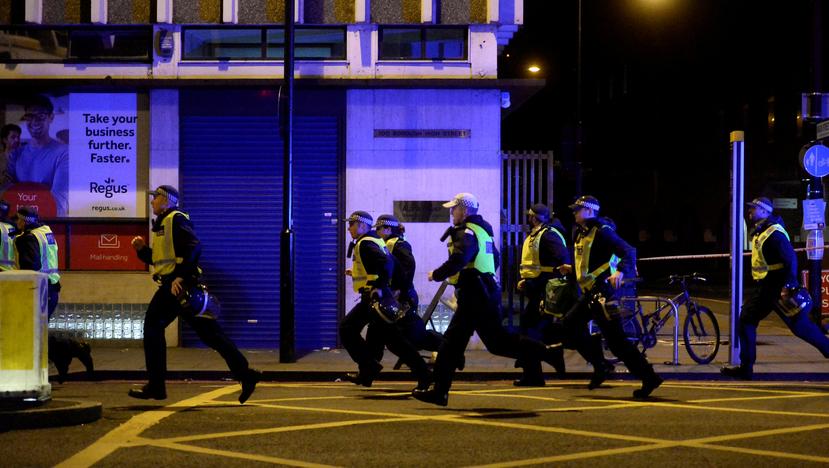 Suspected
militants drove a van into pedestrians at high speed on London Bridge on
Saturday night before stabbing revelers on nearby streets, killing at
least six people and wounding nearly 50.

Armed
police rushed to the scene and within eight minutes of receiving the
first emergency call had shot dead the three male attackers in the
Borough Market area near the bridge.

The
attacks came just five days ahead of a parliamentary election on
Thursday. The ruling Conservative Party suspended national campaigning
on Sunday, a spokesman for Prime Minister Theresa May said.

“Following
updates from police and security officials, I can confirm that the
terrible incident in London is being treated as a potential act of
terrorism,” May said in a statement as events unfolded.

The
assault occurred less than two weeks after a suicide bomber killed 22
people at a pop concert by U.S. singer Ariana Grande in Manchester in
northern England, and in March a man killed five people after driving
into a crowd of pedestrians on Westminster Bridge in central London.

There was no immediate claim of responsibility for the latest attack.
“Sadly,
six people have died in addition to the three attackers shot by
police,” Mark Rowley, Britain’s top anti-terrorism officer, said. The
three attackers had been wearing what looked like explosive vests that
were later found to have been hoaxes.

The
BBC showed a photograph of two possible attackers shot by police, one
of whom had canisters strapped to his body. Hours after the attack the
area remained sealed off and patrolled by armed police and
counter-terrorism officers.

The
London Ambulance Service said 48 people had been taken to five
hospitals across the city and a number of others had been treated at the
scene for minor injuries.
London Mayor Sadiq Khan said some of those who had been injured were in a critical condition.

Khan
said the official threat level in Britain remained at severe, meaning
an attack is highly likely. It had been raised to critical after the
Manchester attack, then lowered again days later.

The mayor also said he did not think Thursday’s election should be postponed because of events in London.
“One
of the things that we can do is show that we aren’t going to be cowed,
is by voting on Thursday and making sure that we understand the
importance of our democracy, our civil liberties and our human rights,”
Khan said.

London Bridge is a
major transport hub and nearby Borough Market is a fashionable warren of
narrow alleyways packed with bars and restaurants. The area is always
bustling on a Saturday night.

Witnesses described a white van careering into pedestrians on the bridge.
“It
looked like he was aiming for groups of people,” Mark Roberts, 53, a
management consultant, told Reuters. He saw at least six people on the
ground after the van veered on and off the pavement. “It was
horrendous,” he said.

A
taxi driver told the BBC that three men got out of the van with long
knives and “went randomly along Borough High Street stabbing people.”
Witnesses described people running into a bar to seek shelter.
“People
started running and screaming, and the van crashes into the railing
behind. We went toward Borough Market and everyone went inside (the
bar),” one witness, who gave his name as Brian, 32, told reuters.

Another witness, who declined to be named, his white top covered in blood, described a scene of panic in the bar.

“They
hit the emergency alarm. There was a line of people going down to the
emergency exit. And then people started screaming coming back up,” the
31-year-old said.
“Around
the corner there was a guy with a stab wound on his neck … There was a
doctor in the pub and she helped him. They put pressure on the stab
wound.”

BBC radio said witnesses saw people throwing tables and chairs at the attackers to protect themselves.
The BBC showed dozens of people being escorted to safety through a police cordon with their hands on their heads.

Islamic State, losing
territory in Syria and Iraq to an advance backed by a U.S-led
coalition, sent out a call on instant messaging service Telegram early
on Saturday urging its followers to launch attacks with trucks, knives
and guns against “Crusaders” during the Muslim holy month of Ramadan.

Similar attacks, in Berlin, Nice, Brussels and Paris, have been carried out by Islamist militants over the past two years.

May was due to chair a meeting of the government’s Cobra security committee later on Sunday.

U.S.
President Donald Trump took to Twitter to offer U.S. help to Britain.
The White House said he had been briefed on the incidents by his
national security team.
French president Emmanuel Macron said on Twitter that “France is standing more than ever side by side with the UK”.

Two
French nationals were among those injured in the London attack,
Macron’s office said in a statement. Australia said two of its citizens
were caught up in the attack and that one was in hospital.

The
Manchester bombing on May 22 was the deadliest attack in Britain since
July 2005, when four British Muslim suicide bombers killed 52 people in
coordinated attacks on London’s transport network. 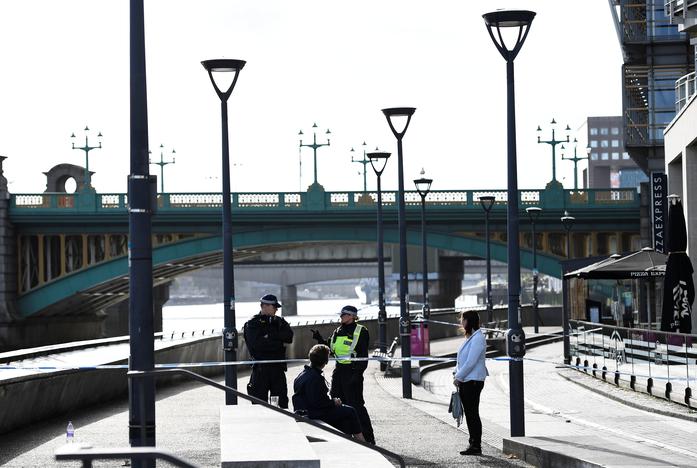 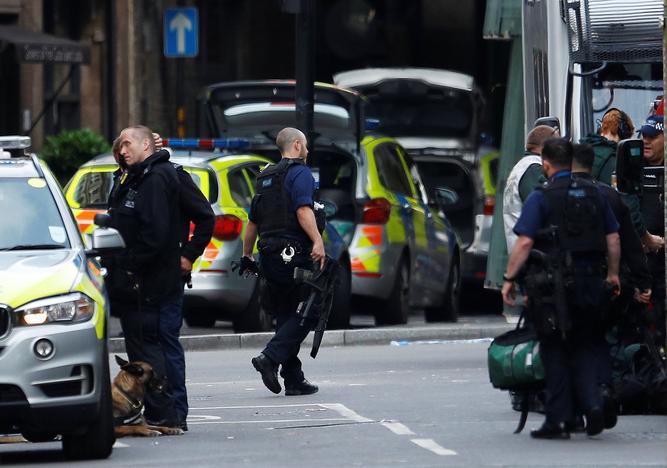