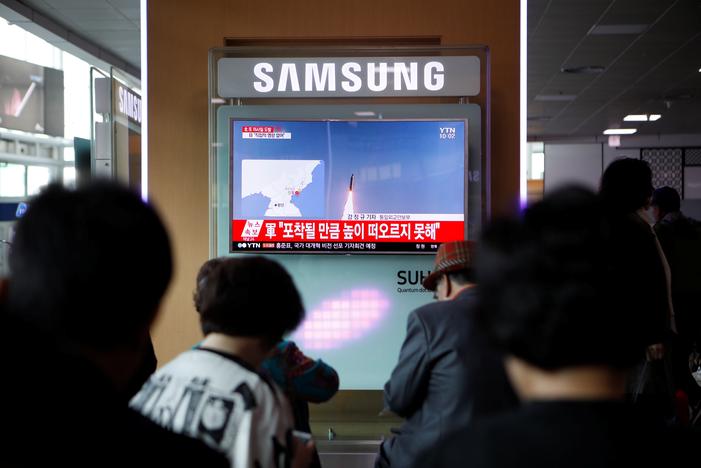 South Korea said the North’s
combined show of force “threatened the whole world” but a U.S. foreign
policy adviser traveling with Pence on Air Force Two appeared to defuse
some of the tension, saying the test of what was believed to be a
medium-range missile had come as no surprise.
“We
had good intelligence before the launch and good intelligence after the
launch,” the adviser told reporters on condition of anonymity.
“It’s
a failed test. It follows another failed test. So really no need to
reinforce their failure. We don’t need to expend any resources against
that.”The adviser said the missile’s flight lasted four or five seconds.
“It
wasn’t a matter of if, it was a matter of when. The good news is that
after five seconds it fizzled out.”Pence is in Seoul at the beginning of
a 10-day trip to Asia in what his aides said was a sign of U.S.
commitment to its ally in the face of rising tension.

The U.S. nuclear-powered USS Carl Vinson aircraft carrier strike group is also heading to the region. (tmsnrt.rs/2p1yGTQ)
A
U.S. Navy attack on a Syrian airfield this month raised questions about
U.S. President Donald Trump’s plans for reclusive North Korea, which
has conducted several missile and nuclear tests in defiance of U.N.
sanctions, regularly threatening to destroy the South and the United
States.

The White House has said Trump has put the North “on notice”.
South Korea, which hosts 28,500 U.S. troops, warned of punitive action if the Sunday launch led to further provocation.
“North
Korea showing a variety of offensive missiles at yesterday’s military
parade and daring to fire a ballistic missile today is a show of force
that threatens the whole world,” South Korea’s Foreign Ministry said in a
statement.

Pence, addressing an Easter service with American troops in South Korea, said the U.S. commitment to South Korea was unwavering.
“Let
me assure you under President Trump’s leadership, our resolve has never
been stronger. Our commitment to this historic alliance with the
courageous people of South Korea has never been stronger.”
The
North has warned of a nuclear strike against the United States if
provoked. It has said it has developed and would launch a missile that
can strike the mainland United States but officials and experts believe
it is some time away from mastering the necessary technology, including
miniaturizing a nuclear warhead.

The
North launched a ballistic missile from the same region this month,
ahead of a summit between the United States and China in Florida to
discuss the North’s arms program.
But
that missile, which U.S. officials said appeared to be a
liquid-fuelled, extended-range Scud, only flew about 60 km (40 miles), a
fraction of its range before spinning out of control.
Tension
had escalated sharply amid concern the North may conduct a sixth
nuclear test or a ballistic missile test around Saturday’s 105th birth
anniversary of founding father Kim Il Sung, what it calls the “Day of
the Sun”.

China, which Trump
has urged to do more to rein in North Korea, has spoken out against its
weapons tests and has supported U.N. sanctions. It has repeatedly called
for talks while appearing increasingly frustrated with the North.

Saturday’s
parade combined with Sunday’s failed missile launch made a sixth
nuclear test increasingly likely, and if one was carried out, China
would be compelled to support new sanctions against North Korea, the
Global Times, an influential tabloid published by China’s Communist
Party paper said in an editorial.

“Beijing
should make clear to Pyongyang through diplomatic channels: if the DPRK
in spite of the opposition of the international community (carry out a
sixth nuclear test), China should cut off the vast majority of their oil
supply and China should support the Security Council to pass new
sanctions including this measure,” the paper said, referring to North
Korea by its official title, the Democratic People’s Republic of Korea.

Worry
about North Korea has also strained ties between China and South Korea
because China objects to the deployment of a U.S. Terminal High Altitude
Area Defense (THAAD) anti-missile system in the South. The installation
has begun but some opposition politicians have raised questions about
it.

“It’s moving. There are still some
things to work out … as in any government decision it may slip a
couple of weeks or months,” the U.S. adviser said of THAAD, whose
powerful radar China fears could penetrate its territory.
“It’s moving but candidly until they get a president … It should be a decision for the next president.”

The South’s presidential election is on May 9.
The adviser said Chinese President Xi Jinping and Trump had discussed “a number of steps” in their meeting.
“We’ve
seen the Chinese already take some initial steps,” the official said,
citing the turning back of the coal ships. “Many steps still to take,
but I think it’s a good first step.”
Impoverished
North Korea and the rich, democratic South are technically still at war
because their 1950-53 conflict ended in a truce, not a peace treaty.

In
Pyongyang, there was a festive atmosphere at a flower show, with
families out, taking pictures with North Korean-made smart phones. There
was no mention of the test failure by the KCNA state news agency.

Company worker Rim Chung Ryol, 30, said he had not heard of the test.
“If it is a failure, then failure is the mother of success,” he told Reuters.
Factory worker Ri Gul Chol, 37, also had not heard about the missile test.
“But
whatever Kim Jong Un decides and instructs will succeed and all the
citizens will support him,” he said, referring to the North’s young
leader.

How Chechnya Cracked Down on Gays Tortured,Detained And Killed.