Electric vehicle
start-up Faraday Future showed off in Las Vegas on Tuesday a prototype
of a vehicle set for production next year as the China-backed company
strives to win credibility in the crowded sector and weather its funding
challenges.
The
“FF 91”, described by its designer Richard Kim as “weird-pretty”, is a
luxury electric SUV Faraday executives say will be the most
technologically advanced on the market when it goes into production in
early 2018. Advance reservations for the car – which insiders say will
retail for about $180,000 – are being taken for $5,000.
“You’re about to witness day one of a new era of
mobility,” said Nick Sampson, senior vice president of engineering and
research and development. “We’re going to show the first of a new
species.”
But cash shortages and a recent spate of executive departures have raised questions about the company’s prospects.
Faraday is funded and controlled by Chinese
billionaire Jia Yueting, the chief executive officer of China’s Leshi
Holdings Co Ltd, also known as LeEco (300104.SZ),
which is showing its own prototype electric car, the LeSee Pro, at CES.
He is also an investor in California-based Lucid Motors, a competing
electric vehicle start-up attending CES this year.

Faraday debuted at CES last year
with a concept car not intended to be produced, raising eyebrows over
the company’s legitimacy and Jia’s overall strategy. A cash crunch at
LeEco and Faraday’s missed payments to a contractor working on its $1
billion Nevada factory have spurred more questions in recent months over
Faraday’s financial situation.
In late December, LeEco said it was in talks to secure 10 billion yuan ($1.4 billion) from an unidentified strategic investor.
Faraday executives would not comment on the company’s financials.

“We’re
hoping to … convince people that we’re real, we are doing a real
product, it’s not just a vaporware Batmobile to create attention, but we
now have a serious product,” Sampson told reporters during a tour of
Faraday’s headquarters in Gardena, California, in December.
Executives
say the car’s modular architecture and flexible battery layout will
allow for a faster rollout of future models. The car will have a range
of about 378 miles (608 km) per charge. Its electric motors will
generate a combined 1,050 horsepower.
The
FF 91, a long, low, futuristic SUV with a roomy interior has no
handles, as doors will open as a driver approaches. Holograms will be
projected on the windshield to alert drivers of needed information.

The car will come equipped with a
package of sensors, including cameras, radar and lidar, to enable
self-driving capability at a future date.
Near
the end of the launch, Jia – wearing a black LeEco hoodie – drove the
car onstage. He got out of the car and was asked to push a button to
make it drive itself to center stage. The car did not move at first.
It made it on a second try. 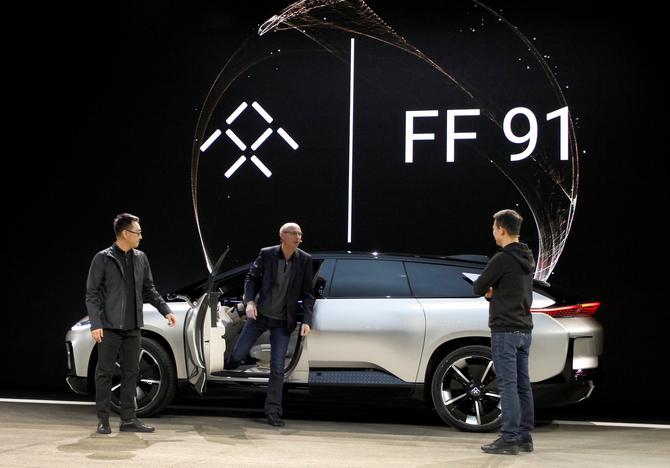 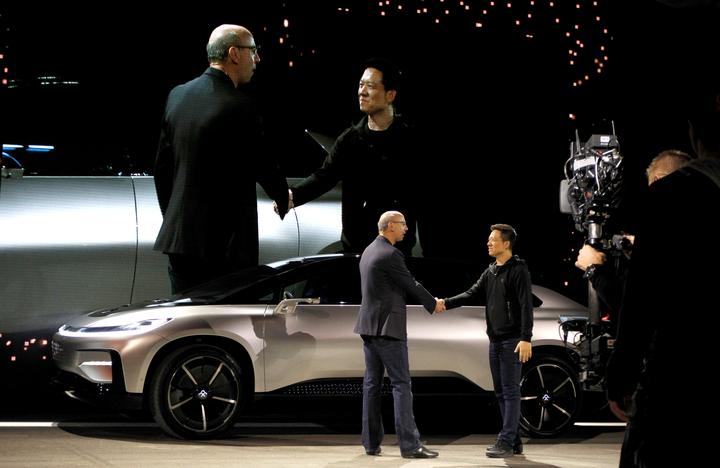 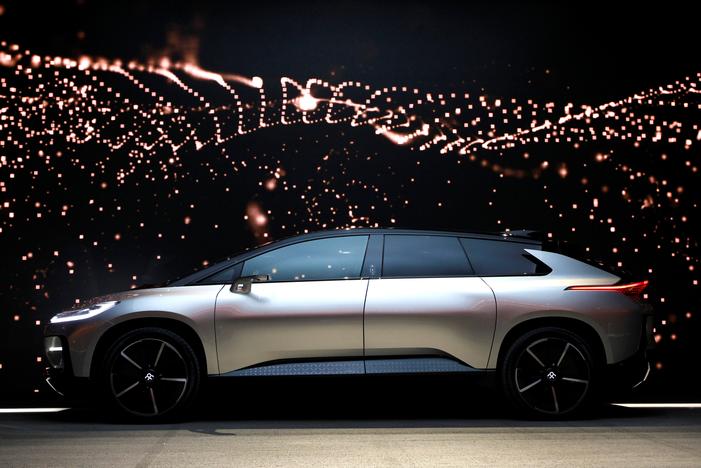