Share
Facebook Twitter LinkedIn StumbleUpon Tumblr Pinterest Reddit WhatsApp Telegram Share via Email Print
Share
China’s imports
grew at the fastest pace in more than two years in November, fueled by
its strong thirst for commodities from coal to iron ore, while exports
also rose unexpectedly, reflecting a pick-up in both domestic and global
demand.
The
upbeat data adds to signs of a modest industrial recovery in the world’s
largest economies, even as China and other Asian exporters brace for a
potential trade war once protectionist U.S. President-elect Donald Trump
takes office.

“The improvement reflects a strengthening in
global demand, with recent business surveys suggesting that developed
economies are on track to end the year on a strong note,” Julian
Evans-Pritchard, China economist at Singapore-based Capital Economics,
said in a note.

“But while global demand has recovered somewhat
recently, lower trend growth in many developed and emerging economies
means that further upside is probably limited.”

China’s November imports expanded
6.7 percent on-year, confounding expectations for a drop of 1.3 percent
and the strongest gain since September 2014, data showed on Thursday.
Exports
rose 0.1 percent from a year earlier, defying predictions for a 5
percent slide.

Demand from all of China’s major trading partners
improved significantly, especially Europe and the United States, though
shipments to emerging economies remained weak.

That
left the country with a trade surplus of $44.61 billion for the month,
the General Administration of Customs said, versus forecasts of $46.30
billion and October’s $49.06 billion.

Analysts
polled by Reuters had expected a more modest drop in November exports
after a 7.3 percent contraction in October, while imports had been seen
falling at roughly the same pace.

China’s imports of
major commodities including iron ore, crude oil, coal, soybeans and
copper all surged in November, despite a sharp weakening in its yuan
currency.

While
some analysts have worried that sharp commodity price rises could be
masking still sluggish demand, the data showed imports rose in both
value and volume terms.

A
government infrastructure building spree and housing rally have fueled a
construction boom in China this year, spurring demand for building
materials from steel bars to cement.
China
imported 91.98 million tonnes of iron ore in November, the third
highest monthly tally on record, while imports of copper, used in
plumbing and wiring, surged 31 percent.

China
also imported its largest volume of coal in 18 months, as utilities
rebuilt stocks to cope with higher winter demand. Its strong appetite
has helped fuel a reflationary pulse in global commodities worldwide.

Some
market watchers, however, suspected the spike in metal imports may have
been due to shipments being delayed from October during the country’s
long National Day holiday. Top suppliers Australia and Brazil may have
also ramped up iron ore exports to China to meet annual targets as the
year-end nears.

“The rise
in copper imports reflected in part a rise in Shanghai Futures Exchange
inventories and stronger demand from the Chinese power and construction
sectors,” said Vivek Dhar, a commodities analyst with Commonwealth Bank
in Melbourne.

“The
debate dividing the market is whether this growth can be sustained into
next year, or will things flatten out. This isn’t necessarily clear
just yet.”

The
better-than-expected trade figures cement expectations that China’s
government will once again meet its full-year growth target, which this
year was set at 6.5 to 7 percent.

But
the world’s largest trading nation could be heavily exposed to
protectionist measures next year if Trump follows through on campaign
pledges to brand it a currency manipulator and impose heavy tariffs on
imports of Chinese goods.

South Korea and Taiwan are worried, too. Both also reported stronger-than-expected exports in November.

“We
would not think of the positive (China) numbers as an inflection point.
Of all the high frequency economic data over the year, trade headwinds
are likely to be the most severe, and the most uncontrollable, due to
trade policies of other countries,” said Chester Liaw, an economist at
Forecast Pte Ltd in Singapore.

China
is squarely in Trump’s sights. Its trade surplus with the United States
has widened steadily over the past years, expanding 6.5 percent to
$367.11 billion in 2015, U.S. Census Bureau data showed.

Even
if Trump does not try to impose punitive measures, growing
protectionist sentiment could have a chilling effect on trade and
investment worldwide.

The
chief of China’s sovereign wealth fund said on Thursday he expected
Trump to be very careful in considering whether to increase tariffs in
line with his election promises because it would not be in U.S.
interests. The United States is China’s largest trading partner.

Stubbornly
weak export demand has dragged on China’s economic growth to the point
where Beijing did not even set a trade target this year.

That
has forced policymakers to rely on higher government spending and
record bank lending to boost activity, even at the risk of adding to a
mountain of debt.

China’s
exports in the first 11 months of the year fell 7.5 percent from the
same period a year earlier, while imports dropped 6.2 percent.

Analysts
have warned that a property boom which has generated a significant
share of economic growth this year may be peaking, threatening to snuff
out a spectacular months-long rally in Chinese commodities prices. 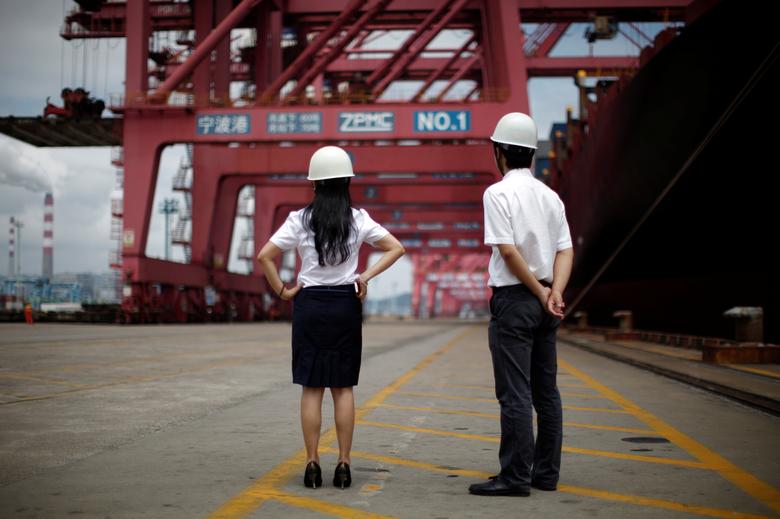