The new head of
South Africa’s anti-graft unit, which this month alleged
influence-peddling in President Jacob Zuma’s cabinet, has laid a
complaint against her predecessor for leaking a recorded interview with
the president, newspaper Sunday Times reported on Sunday.

Former
watchdog Thuli Madonsela has said she had the right to make public the
audio recording after Zuma accused her of not giving him an opportunity
to defend himself.

In her
last days in office Madonsela concluded a report which, while stopping
short of any conclusive findings, did call for a judicial inquiry to
probe the allegations.

The
report focused on claims that the brothers, Ajay, Atul and Rajesh Gupta
influenced the appointment of ministers, and called for an
investigation into whether Zuma, some of his cabinet members and some
state companies had acted improperly.

The
office of new Public Protector Busisiwe Mkhwebane did not respond to
numerous telephone and email requests for comment regarding the reported
leak.

But
the Sunday Times says that Mkhwebane filed the criminal complaint on
Nov. 16, and quoted her as saying “an investigation … needs to happen
whether the leakage happened in violation of section 7(2) of the Public
Protector Act”.

The report’s publication included a transcript of the four-hour interview between Madonsela and Zuma.

Zuma, who has denied any wrongdoing, said on Friday he would challenge the report in court.

The
affair rattled markets in Africa’s most industrialized economy, which
over the weekend dodged ratings downgrades from two of the major
agencies, with a third review from Standard & Poor’s to follow next
Friday.

It has also stoked divisions within
the ruling African National Congress (ANC), which have bubbled into
public squabbles after the party suffered its worst-ever local election
results in August since coming to power in 1994.

Zuma
is due be questioned next week by the ANC’s integrity commission over
the graft report, persistent allegations of corruption and the poor
election results. 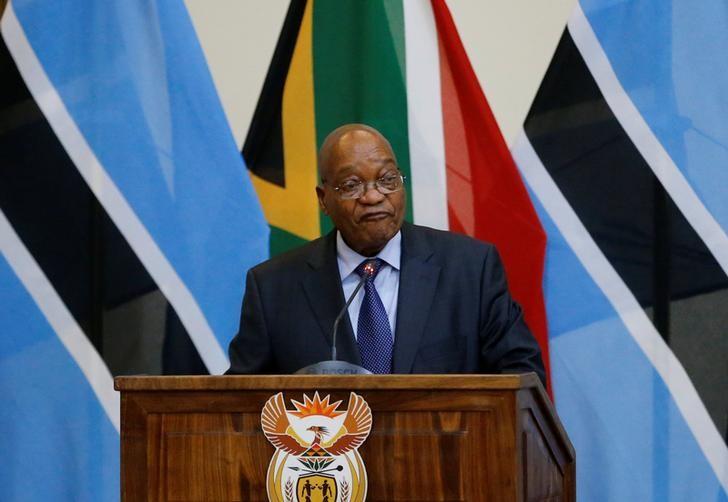