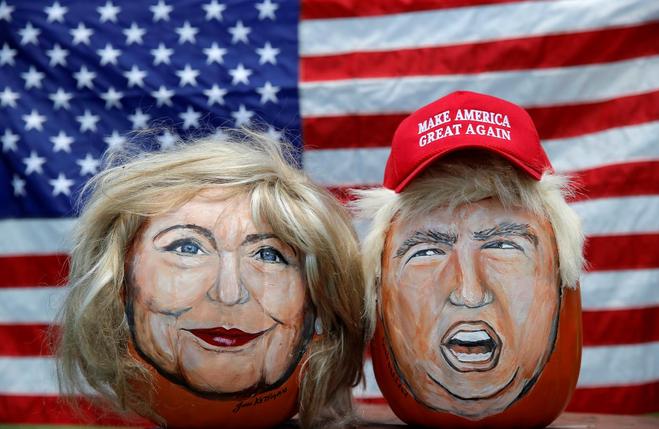 Clinton,
the former secretary of state, made history when she became the first
woman to lead a major political party in its quest to capture the U.S.
presidency. Big primary election wins on Tuesday in California and
elsewhere catapulted her to victory over Democratic opponent Bernie
Sanders.

If elected on Nov. 8, the
68-year-old would return the Clinton family to the White House 16 years
after her husband, Bill Clinton, completed two terms as president.

All
signs point toward a negative campaign for five months as Clinton
accuses Trump of being temperamentally unfit to serve and the New York
billionaire charges Clinton has a dark past with shades of corruption
and a weak record as President Barack Obama’s first-term secretary of
state.

The Clinton campaign drew on
critical comments from Republicans themselves to portray the
69-year-old Trump as not fit for the Oval Office after the real estate
developer repeatedly accused a Mexican-American judge of showing bias
against him because of his ethnic heritage.

“The
most effective thing to do with Donald Trump is just to get his words
out there and let him speak for himself,” Clinton campaign manager Robby
Mook told CNN on Wednesday.

Mook
charged Trump with a history of “erratic behavior,” the same language
leveled by the Obama campaign in its defeat of Republican nominee John
McCain in 2008.

Trump gave a
carefully crafted primary race victory speech on Tuesday laying out his
own plan of attack. To keep from straying off message, he used a
Teleprompter and avoided his typical stream-of-consciousness delivery.

Trump
said money given to the Clinton Foundation charity from foreign donors
has earned the Clintons millions of dollars and had a corrupting
influence when Hillary Clinton was secretary of state and used a private
email server to conduct official business.

“Hillary Clinton turned the State Department
into her private hedge fund – the Russians, the Saudis, the Chinese –
all gave money to Bill and Hillary and got favorable treatment in
return. It’s a sad day in America when foreign governments with deep
pockets have more influence in our own country than our great citizens,”
Trump said.

He said he would give a speech next week “discussing all of the things that have taken place with the Clintons.”

Both Clinton and Trump must unite their
parties behind them but the Democrat appeared to face the easier path
with Sanders, a leftist U.S. senator from Vermont, nearly out of options
to challenge her.

Trump has an
uphill battle, with many party leaders still opposed to him. U.S. House
of Representatives Speaker Paul Ryan described Trump’s remarks about the
judge as a “textbook definition of a racist comment” but said he would
still support him.

Ryan
met behind closed-doors on Wednesday with House Republicans. An aide
said Ryan “discussed with his members the thinking behind his
endorsement (of Trump) and how to move forward” and reiterated he had
confidence Trump would support the House Republican agenda.

Republicans
complain that Trump still engages in petty battles with former rivals
and is way behind in building a fund-raising organization. Trump will
meet on Thursday in New York with top fund-raisers of the Republican
National Committee, a party official said.

Hopes
flickered among some anti-Trump Republicans that there will be a revolt
against him when delegates convene to nominate him formally in
Cleveland between July 18-21.

“It
is in best short-term and long-term interests of the party to have the
ability to cast off Trump, and for delegates to employ that authority,”
Republican strategist Rory Cooper wrote in a blog post.

Clinton
edged Sanders out in a rough-and-tumble battle that stretched over four
months and 50 states. She won support, especially among older voters,
with a more pragmatic campaign focused on building on the policies of
fellow Democrat Obama.

Democratic
Party elites are lined up squarely behind Clinton, including most likely
Obama, who may endorse her as early as this week. White House Press
Secretary Josh Earnest told reporters Obama would not endorse until
after he meets with Sanders on Thursday.

Obama
and Sanders have spoken three times in the last month, Earnest said.
The president’s eventual endorsement would put pressure on Sanders to
exit graciously and throw his support to Clinton. Sanders is also due to
meet with Senate minority leader Harry Reid.

Obama
also has congratulated Clinton on her nomination win. The Associated
Press called the race in California for Clinton early on Wednesday.
Clinton won 56 percent to Sanders’ 43 percent, avoiding what would have
been an embarrassing loss for her in America’s most populous state.