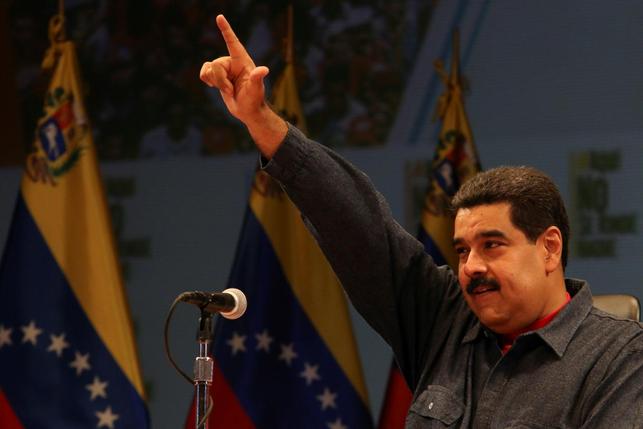 Called “mad as a
goat” by Uruguay’s Jose Mujica this week, Venezuelan President Nicolas
Maduro retorted laughingly on Thursday that the former president was
right – but he was only crazy with love for his country.
“Yes, I’m mad as a goat, it’s true,” Maduro told a rally of the ruling Socialist Party.

“I’m
mad with love for Venezuela, for the Bolivarian Revolution, for Chavez
and his example,” he added, smiling as the crowd cheered, in a reference
to former President Hugo Chavez.

Mujica, a fellow
leftist who ruled Uruguay between 2010 and 2015, said on Wednesday he
respected Maduro, but still thought he and others in Venezuela were
“crazy” for attacking each other rather than sitting down to resolve
problems.

Amid a deep economic
crisis, Venezuela’s opposition is pushing for a recall referendum to
oust Maduro. Government officials say that will not happen this year,
and security forces have been blocking protest marches demanding the
vote.

Numerous foreign
countries are calling for dialogue, but there is deep hostility and
suspicion between Maduro’s government and the opposition Democratic
Unity coalition.

Uber’s rivals in Africa think they can win with happier drivers.