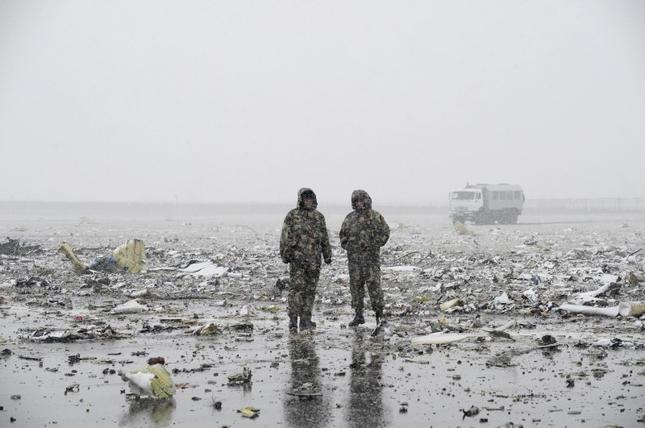 All 62 people
aboard a passenger jet flying from Dubai to southern Russia were killed
when their plane crashed on its second attempt to land at Rostov-on-Don
airport on Saturday, Russian officials said.
Russia’s emergencies ministry said the aircraft, a Boeing (BA.N) 737-800 operated by Dubai-based budget carrier Flydubai, crashed at 0340 (0040 GMT). Most of those on board were Russian.

“The
aircraft hit the ground and broke into pieces,” the Investigative
Committee of Russia said in a statement on its website. “There were 55
passengers aboard and seven crew members. They all died.”
Both of the plane’s flight recorders have been recovered undamaged, the committee said in a statement.
According
to the independent U.S.-based Flight Safety Foundation, there was
strong wind at the airport with a speed of 43 kilometres per hour, with
gusts up to 69 kilometres, but visibility was reasonable.

“Different
versions of what happened are being looked into, including crew error, a
technical failure and bad weather conditions,” the committee said.

It
said the plane was in a mid-air holding pattern for more than two
hours. The crash occurred more than two hours after the plane, flight
number FZ981, was scheduled to land.

Russia’s
Interfax news agency cited a source in the emergency services as saying
the pilot changed his mind about landing on the approach to the
airport.

“For an unknown reason,
several minutes before the landing, the pilot reconsidered and decided
to make another circuit, but wasn’t able to,” Interfax quoted the source
as saying.

Flydubai’s CEO Ghaith
al-Ghaith told a news conference in the Gulf Arab emirate that it was
“too early” to determine the cause of the crash.

“We
will have information about the circumstances of the incident and the
black box in the future, and an investigation is being conducted in
cooperation with the Russian authorities and we are waiting to see the
results,” Ghaith said.

ALERT
Security
officials in the Middle East are on heightened alert for militant
threats to aviation following the Islamic State claim of responsibility
for downing a Russian passenger plane over Egypt’s Sinai Peninsula in
late October, in which all 224 people on board died.

Sergei Melnichenko, head of Aviation Safety consultancy in Moscow, said so far little pointed to an act of terrorism.

“Nothing
points to that,” Melnichenko said. “But nothing can be fully ruled out
until a complete decryption of the flight recorders is done.”

According
to the flight tracker Flightradar24, an Aeroflot flight SU1166 from
Moscow made three landing attempts in Rostov before being diverted. It
landed at 2315 GMT in Russia’s Krasnodar.

A
source familiar with the investigation told Reuters that there was no
weather-related ban on landing at the airport. “We consider all possible
causes, but no one is even talking now about the possibility of a
terrorist attack,” the source, who spoke on condition of anonymity,
said.

Under international aviation rules, the
investigation will be led by Russia’s air crash safety investigation
agency with representatives from the United States, where the jet was
made and the United Arab Emirates where the airline is based.
Boeing will be appointed as technical advisers to the U.S. investigation team.

The
Flydubai airline had a clean safety record before the accident. It
started flying in June 2009, with a fleet of new Boeing 737s, one of the
world’s most widely flown planes.

It suffered an incident when one of its planes was shot at while landing at Baghdad airport on Jan. 27, 2015.
The aircraft that crashed was just over five years old.

The Flydubai plane came down inside the airport’s perimeter, about 250 metres (yards) short of the start of the runway.

Grainy
pictures from a security camera pointing towards the airport, which
were broadcast on Russian television, showed a large explosion at ground
level, with flames and sparks leaping high into the air.
Ghaith
of Flydubai said that he had no information to indicate that the pilot
had issued a distress call. Both the pilot and co-pilot had over 5,000
hours of flight experience each, he said.

There
was one Russian among the seven-person crew, the Russian emergency
ministry said in a statement. The pilot was Cypriot, the co-pilot and
another crew member Spanish and the other three were from Seychelles,
Colombia and Kyrgyzstan.

Flydubai
said in a statement that there were 44 Russians among the 55
passengers, eight Ukrainians, two Indians and one Uzbek. Four children
were among the dead.

Russian
agencies cited Rostov’s government representative as saying that the
remains of those killed had been taken to a local morgue and families
would able to identify them on Sunday.

Russian President Vladimir Putin ordered assistance to be given to the relatives of those killed.

“The
head of state said that now the main thing is to work with the families
and the loved ones of those who had died,” the Kremlin said in a
statement on its website.

EKO FOR SHOW THIS EASTER