If Donald Trump
wins the Republican Party nomination, his path to the White House will
run through this working-class city with a knack for picking presidents.

No
Republican has ever won the White House without Ohio. And nowhere
better reflects the challenges and opportunities Trump faces in his 2016
presidential quest than Canton, a once-booming industrial city that,
like Ohio and the rest of America’s rust belt, is going through profound
economic and demographic change.

Canton,
a gritty northeastern Ohio city where the once-dominant steel industry
has been in decline for 20 years, is the heart of Stark County, a
political bellwether that, save twice, has picked every winning
presidential candidate since 1964.

The
real-estate mogul’s primary wins in Michigan and in Mississippi on
Tuesday, in the face of blistering attacks from the party’s
establishment, expanded his lead in the White House nominating race and
demonstrated his broad appeal across many demographic groups in the
Republican Party.

But here, in
predominately white Canton, the birthplace of professional American
football, he will need to show cross-over appeal in the general election
and win over not just Republicans but working-class Democrats and some
independents, to beat a Democrat, illustrating the challenge he will
face in Ohio and potentially other Midwestern “rust belt” states.

A
more immediate test looms next week in the state’s Republican primary,
where polls show Trump narrowly leads Ohio Governor John Kasich, who
casts himself as a pragmatic, statesman-like alternative to Trump. If
Trump wins Ohio and Florida — states rich in the delegates who select
their party’s nominee at July’s Republican National Convention –  he
would almost certainly lock up his party’s nomination.

Sitting
in a steel workers’ meeting at their Canton union hall, Curtis Green,
the chapter’s vice president, described Trump’s support among a growing
number of members as their “dirty little secret.”

“I
view him as a radical and a racist and I don’t want to be affiliated
with that,” Green said. “But if you say what you mean, a lot of guys see
that in Trump and they respect that. He doesn’t dance around the
issues, he takes them head on. There are a fair amount of our members
who do support Donald Trump.”

If
Trump just wins the states that Republican nominee Mitt Romney won in
2012, he would have only 206 electoral college votes, short of the 270
needed to win the White House. The fight over electoral college votes
has turned recent elections into pitched battles over a dozen or so
states.
Ohio is often at the center.

The
state, which has not voted for the loser in a presidential election
since 1960, is seen as a microcosm of American swing voters — from
culturally conservative “Reagan Democrats” who defected from their party
to support Republican Ronald Reagan in the 1980s to suburban soccer
moms and upwardly mobile Hispanics.

To offset the
growing proportion of blacks and Hispanics in the voting age population,
Trump must turn white voters out in greater numbers than Romney in
cities such as Canton. His performance in primary states where Democrats
and independent can vote, as well as Republicans, suggests Trump could
attract large numbers of these voters in a general election.

Reuters interviews here with more than two dozen voters show why.
In
this city of 72,500 people, Trump’s denunciation of free trade,
political correctness and illegal immigrants is resonating among some
traditionally Democratic blue-collar steel workers.

“The
labor unions, who usually support the Democrats, a lot of our members,
and a lot of their families, are supporting Trump,” said Keith Strobelt,
a political director for the United Steelworkers local union in Canton.
Strobelt does not support Trump.
Canton’s
local United Steelworkers union has 1,800 members – down from 6,700 at
its peak 30 years ago. Its leadership has not officially endorsed a
candidate, thought it has praised Democrat Senator Bernie Sanders. Some
rank-and-file members, however, say they better identify with Trump’s
broadsides against illegal immigration and tirades against trade with
China and Mexico.

“It could be that
several hundred of our members will back Trump,” Strobelt said. “A lot
find him refreshing. He says a lot of things they say around their
dinner tables.”

“WRINGING THEIR HANDS”
But
in a general election, Trump faces formidable odds in Canton, as he
does across Ohio and the Midwest. Canton and the region is changing in
ways that favor Democrats, reflecting the Republican Party’s broader
problems with a U.S. electorate that is becoming less white and less
culturally conservative.

In 2000,
Canton was nearly 75 percent white, with an African American population
of 20 percent, and an Hispanic population of just over 1 percent. Its
biggest employer was the Timken Company, a giant ball bearing and high
custom steel manufacturer that was the dominant economic force in Canton
for much of the 20th century.

By
2010, according to Census data, Canton was 69 percent white. Its black
population had increased by 3 percent, its Hispanic residents to nearly 3
percent.

Tuesday’s primary in
neighboring Michigan showed how volatile this election has become, with
Trump’s potent appeal among disaffected whites stretching beyond the
South. In the Democratic race, Sanders won most of the state’s white
working-class countryside and small towns in an upset over front-runner
Hillary Clinton.

In Canton, like
elsewhere in the “rust belt” heartlands stretching from the Midwest to
the Great Lakes region and parts of the Northeast, manufacturing has
been hollowed out since the 1970s, due in part to foreign competition.
In 1990, Ohio had over 1 million manufacturing jobs; today, just
680,000, according to the U.S. Bureau of Labor Statistics. Ohio has shed
nearly 200,000 manufacturing jobs since the 2007-2009 Great Recession.

“While
Trump might pick up blue collar Democrats, and older folks who are
disillusioned with the political process, the flip side is he could lose
more upper-status voters in Ohio,” said John Green, a political science
professor at the University of Akron, close to Canton. “Republican
Party leaders in Ohio are wringing their hands. There is a perception
that Trump helps among blue collar voters – but could alienate white
collar voters.”

Jane Timken, the
vice-chair of the Stark County Republican Party and the wife of
TimkenSteel’s chief executive, said the local party was encountering
people who had never voted Republican before but were supporting Trump.

But,
she said, there was concern Trump might turn off other voters,
especially independents who account for one fifth of Ohio’s voters.

There
is no polling to predict which way Canton and Stark County will vote in
November’s general election. But after a long era of mixed local
government, the city council, after elections last year, is now made up
of entirely Democratic Party members, although the current mayor, a
former Democrat, won office as an independent.
In
Canton, there are nearly 6,000 voters registered as Democrats, compared
to just over 1,100 Republicans according to the Stark County Board of
Elections. In 2006, there were 12,000 registered Democrats and 4,400
Republicans.

“Trump
put together a coalition in Massachusetts that elects Democratic
governors. He won among Catholics, a week after picking a fight with the
Pope. I absolutely think he can put the rust belt into play,” she said. 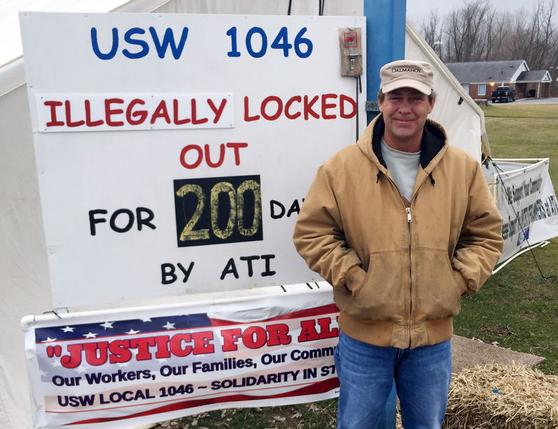