Share
Facebook Twitter LinkedIn StumbleUpon Tumblr Pinterest Reddit WhatsApp Telegram Share via Email Print
Share
A Ukrainian woman pilot on trial in Russia over the killing of two Russian journalists plans to tell a court to release her within 10 days of pronouncing its verdict or she will starve herself to death.
Nadezhda Savchenko, 34, was captured by pro-Moscow rebels in eastern Ukraine in June 2014 and denies any wrongdoing.
The helicopter pilot, who faces up to 25 years in jail if found guilty, has become a national hero for many in Ukraine who see her as a symbol of anti-Kremlin defiance.
Savchenko said on Thursday she was going on hunger strike to protest the length of what she said was an unjust legal process after the judge in her trial adjourned proceedings just as she was about to deliver a final speech.
On Friday her sister published on social media the text of what she had planned to say in court.
Peppered with excoriating criticism of modern Russia and President Vladimir Putin, it makes clear Savchenko plans to try to use her hunger strike to force Moscow to do a deal with Ukraine to release her.
Once the verdict is pronounced the text of her speech shows she plans to deliver the court an ultimatum.
“Russia will have no more than 10 days to return me to Ukraine from where they snatched me,” she wrote.
“TOTALITARIAN REGIME”
Referring to a possible deal for her release that might involve Russia, Ukraine and the West, she wrote: “While this trading over me continues, life will be leaving me, and Russia all the same will return me to Ukraine dead or alive.”
It is unclear whether the court will allow her to read out the speech. Her defense lawyers have accused Moscow of conducting a “show trial” and Western politicians and rights groups have called for her release.
“I want the entire civilized and democratic world to understand that Russia is a third-world country with a totalitarian regime and a despotic dictator, in which they spit on human rights and international law,” Savchenko wrote in the text released by her sister.
Putin, she wrote, was a “tyrant with imperial ambitions suffering from a Hitler/Napoleon complex.”
Ukrainian President Petro Poroshenko said on Friday Kiev would redouble its efforts to bring Savchenko home.
“This farce absolutely cannot continue,” his press service quoted him as saying.
State prosecutors’ allegations center on Savchenko’s conduct during the separatist conflict in eastern Ukraine, which pits pro-Kremlin rebels against the Ukrainian army.
Prosecutors say that in June 2014 Savchenko had helped to direct artillery fire in the Luhansk region where a shell killed two Russian television reporters.
Her lawyers say the time and location of calls made from her mobile phone disproves the allegations.
A verdict is expected in the case soon. 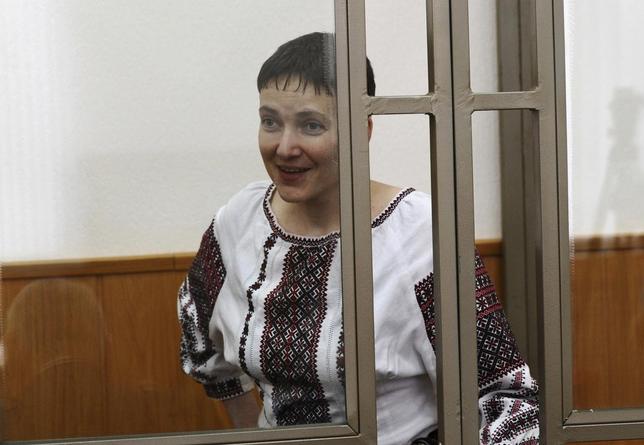