Share
Facebook Twitter LinkedIn StumbleUpon Tumblr Pinterest Reddit WhatsApp Telegram Share via Email Print
Share
A closely divided Supreme Court struggled with its biggest abortion case in years on Wednesday, with pivotal Justice Anthony Kennedy voicing concerns about a restrictive Texas law yet stopping short of signaling he would strike it down.
The court’s four liberal justices indicated they believed the law, which imposes strict regulations on abortion doctors and clinic buildings, intrudes on a woman’s constitutional right to end a pregnancy established in a 1973 ruling.
Conservative justices including Kennedy expressed doubt during the 85-minute oral argument about claims by abortion providers who asserted that the Republican-backed 2013 law forced numerous clinics to shut down.
Kennedy at one point suggested sending the case back to a lower court to get further evidence on the law’s impact, including an assessment of the ability of existing Texas clinics to meet the demand for abortions.
If there is evidence new clinics that meet the state’s regulations have increased capacity to perform abortions, it would show the law has provided a “beneficial effect,” Kennedy said.
The outcome appeared to be in the hands of Kennedy, who often casts the deciding vote in close rulings. In past abortion cases, he has backed a fundamental right to abortion while supporting some restrictions.
The court was shorthanded with only eight justices following the Feb. 13 death of conservative Antonin Scalia, leaving the liberals and conservatives evenly divided.
The best that supporters of the law could hope for would be a 4-4 split that would let stand a lower-court ruling that affirmed the Texas regulations but set no nationwide legal precedent on whether other states could enact similar measures.
However, a such ruling leaving the Texas law intact could encourage other states with anti-abortion legislatures to pass similar laws.
Kennedy gave little indication he would be willing to uphold the law in full, as his three conservative colleagues would be expected to do. If Kennedy sides with the court’s four liberals, the court could either send the case back to the lower court or strike it down.
A ruling is due by the end of June. A decision sending the case to a lower court could mean the dispute might not be resolved for years.
Some justices questioned the lack of evidence on why specific clinics closed after the law was passed, which could be addressed if new legal proceedings take place. Abortion providers assert that the law caused 22 of 41 clinics to close, but the state contests those numbers.
Texas contends the law, passed by a Republican-controlled legislature and signed by a Republican governor, protects women’s health. The abortion providers who have challenged it assert that the regulations are aimed at shutting down their clinics.
In a sign that he was not comfortable with aspects of the law, Kennedy sounded concerned about a possible increase in surgical abortions prompted in part by the state’s separate new restrictions on medically induced abortions, in which women take pills to terminate a pregnancy. Kennedy said that “this law has really increased the number of surgical procedures as opposed to medical procedures, and that this may not be medically wise.”
Abortion rights advocates say surgical abortions increased because of the delays women seeking an abortion faced as a result of the 2013 law.
Liberal Justice Ruth Bader Ginsburg questioned the need for a provision of the law requiring clinics to have costly, hospital-grade facilities, when abortions almost always are low-risk procedures for the woman.
“What was the problem the legislature was responding to that it needed to improve the facilities for women’s health?” Ginsburg asked.
The Texas law requires abortion doctors to have “admitting privileges,” a type of formal affiliation, at a hospital within 30 miles (48 km) of the clinic. Abortion providers say the provision already has forced clinics to close because such an affiliation is hard to obtain.
The abortion providers also challenged a provision, not yet in effect, requiring clinics to have hospital-grade facilities with standards for corridor width, plumbing, parking spaces, room size, the spacing of beds and many other attributes.
Conservative Justice Samuel Alito indicated support for the regulations and referred to evidence that abortion facilities in Texas “have been cited for really appalling violations when they were inspected: holes in the floor where rats could come in, the lack of any equipment to adequately sterilize instruments.”
The Supreme Court’s last major abortion ruling came in 2007 when it upheld a federal law banning a late-term abortion procedure.
The Supreme Court legalized abortion in the 1973 Roe v. Wade case. But abortion remains a disputed issue in the United States, as it does in many countries, and some states have passed laws aiming to place a variety of restrictions on a woman’s ability to terminate a pregnancy.
The court is considering the Texas case in the midst of the heated campaign ahead of the Nov. 8 U.S. presidential election. 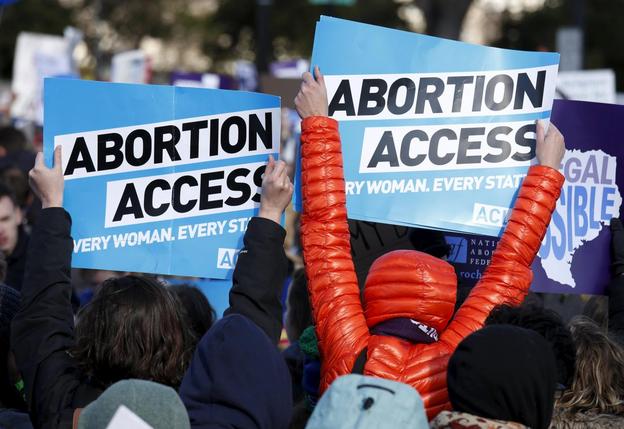