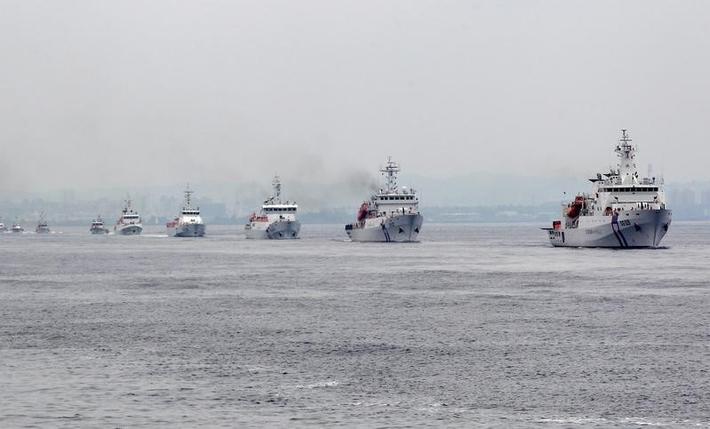 China has deployed an advanced surface-to-air missile system to one of the disputed islands it controls in the South China Sea, Taiwan and U.S. officials said, ratcheting up tensions even as U.S. President Barack Obama urged restraint in the region.
Taiwan defense ministry spokesman Major General David Lo told Reuters on Wednesday the missile batteries had been set up on Woody Island. The island is part of the Paracels chain, under Chinese control for more than 40 years but also claimed by Taiwan and Vietnam.
A U.S. defense official also confirmed the “apparent deployment” of the missiles, first reported by Fox News.
China’s foreign minister said reports by “certain Western media” should focus more on China’s building of lighthouses to improve shipping safety in the region.
“As for the limited and necessary self-defense facilities that China has built on islands and reefs we have people stationed on, this is consistent with the right to self-protection that China is entitled to under international law so there should be no question about it,” Wang Yi told reporters in Beijing.
The Chinese defense ministry told Reuters in a statement that defense facilities on “relevant islands and reefs” had been in place for many years, adding that the latest reports about missile deployment were nothing but “hype”.
China claims most of the South China Sea, through which more than $5 trillion in global trade passes every year, and has been building runways and other infrastructure on artificial islands to bolster its title.
The United States has said it will continue conducting “freedom of navigation patrols” by ships and aircraft to assure unimpeded passage through the region, where Vietnam, Malaysia, Brunei, the Philippines and Taiwan have rival claims.
Admiral Harry Harris, the commander of the U.S. Pacific Command, said the deployment of missiles to the Paracels would not be a surprise but would be a concern, and be contrary to China’s pledge not to militarize the region.
“We will conduct more, and more complex, freedom of navigation operations as time goes on in the South China Sea,” Harris told a briefing in Tokyo. “We have no intention of stopping.”
News of the missile deployment came as Obama and leaders of the Association of Southeast Asian Nations concluded a summit in California, where they discussed the need to ease tensions in the South China Sea but did not include specific mention of China’s assertive pursuit of its claims there.
China’s increasing military presence in the disputed sea could effectively lead to a Beijing-controlled air defense zone, analysts said.
“(The missile deployment) reinforces the view that China intends to exert growing control in these international waters, including potentially by declaring an Air Defense Identification Zone,” said Rory Medcalf, Head of the National Security College at the Australian National University.
Mira Rapp-Hooper, a South China Sea expert from the Center for a New American Security, said it was not the first time that China had sent such weapons to the Paracels.
“I do think surface-to-air missiles are a considerable development,” she said. “If they have been deployed they are probably China’s effort to signal a response to freedom-of navigation operations, but I don’t think it is a totally unprecedented deployment.”
A U.S. Navy destroyer sailed within 12 nautical miles of Triton Island in the Paracels last month, a move China condemned as provocative.
China last month said it would not seek militarization of its South China Sea islands and reefs, but that did not mean it would not set up defenses.
“Woody Island belongs to China,” said Ni Lexiong, a naval expert at the Shanghai University of Political Science and Law.
“Deploying surface-to-air missiles on our territory is completely within the scope of our sovereign rights. We have sovereignty there, so we can choose whether to militarize it.”
Taiwan President-elect Tsai Ing-wen said tensions were now higher in the region.
“We urge all parties to work on the situation based on principles of peaceful solution and self-control,” Tsai told reporters.
Vietnam’s foreign ministry did not immediately respond to requests for comment. But in a rare move, the country’s prime minister on Monday pressed Obama for a greater U.S. role in preventing militarization and island-building in the South China Sea.
Images from civilian satellite company ImageSat International show two batteries of eight surface-to-air missile launchers on Woody Island, as well as a radar system, Fox News said.
The missiles arrived over the past week and, according to a U.S. official, appeared to show the HQ-9 air defense system, which has a range of 125 miles (200 km) and would pose a threat to any airplanes flying close by, the report said.
In November, two U.S. B52 strategic bombers flew near artificial Chinese-built islands in the Spratly Islands.
Asked about the report, Bill Urban, a Pentagon spokesman, said: “While I cannot comment on matters related to intelligence, we do watch these matters very closely.”