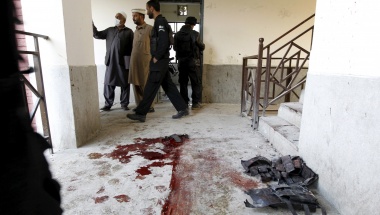 Armed militants stormed a university in volatile northwestern Pakistan on Wednesday, killing at least 20 people and wounding dozens a little more than a year after the massacre of 134 students at a school in the area, officials said.
A senior Pakistani Taliban commander claimed responsibility for the assault in Khyber Pakhtunkhwa province, but an official spokesman later denied involvement, calling the attack “un-Islamic”.
The violence nevertheless shows that militants retain the ability to launch attacks, despite a country-wide anti-terrorism crackdown and a military campaign against their strongholds along the lawless border with Afghanistan.
A security official said the death toll could rise to as high as 40 at Bacha Khan University in the city of Charsadda. The army said it had concluded operations to clear the campus six hours after the attack began, and that four gunmen were dead.
A spokesman for rescue workers, Bilal Ahmad Faizi, said 19 bodies had been recovered including students, guards, policemen and at least one teacher, named by media as chemistry professor Syed Hamid Husain. Husain reportedly shot back at the gunmen with a pistol to allow his students to flee.
Many of the dead were apparently shot in the head execution-style, TV footage showed.
The militants, using the cover of thick, wintry fog, scaled the walls of the university on Wednesday morning before entering buildings and opening fire on students and teachers in classrooms and hostels, police said.
Students told media they saw several young men wielding AK-47 guns storming the university housing where many students were sleeping.
“They came from behind and there was a big commotion,” an unnamed male student told a news channel from a hospital bed in Charsadda’s District Hospital. “We were told by teachers to leave immediately. Some people hid in bathrooms.”
Thirty five of the wounded remain in hospital, a local police official said late on Wednesday.