Share
Facebook Twitter LinkedIn StumbleUpon Tumblr Pinterest Reddit WhatsApp Telegram Share via Email Print
Share
One person died and four miners escaped when the mine collapsed on Friday.
Since then, rescue workers have managed to pull a number of miners to safety.
China has a long history of industrial accidents. The latest incident comes days after a deadly landslide caused by construction waste in southern China.
Ma Congbo, the chairman of Yurong company which owns the mine, drowned himself by jumping into a mine well early on Sunday, China’s Xinhua news agency reports.
It happened two days after the mine collapsed in Pingyi County’s Linyi city, Shandong Province, just before 20:00 local time. It is not yet clear what caused the collapse.
Rescuers have drilled a hole to access some of the trapped workers, and are trying to transfer food and water, officials say. More than 700 emergency officials are involved in rescue efforts, according to Linyi Mayor Zhang Shuping.
Xinhua news agency reports that seven people have been rescued so far.
The facility was used to mine gypsum, a soft mineral that is widely used in construction.
The latest incident comes a week after a landslide in the southern city of Shenzhen killed one person and left another 75 people missing, presumed dead.
Authorities say the landslide was caused when a huge man-made mound of earth and construction debris lost stability and collapsed.
It is one in a series of industrial accidents to occur this year, with questions raised about rapid industrialisation and safety standards in China.
According to Associated Press, 931 people were killed in mine accidents in China last year. However that is a big fall from 2002 when 7,000 miners were killed at work. 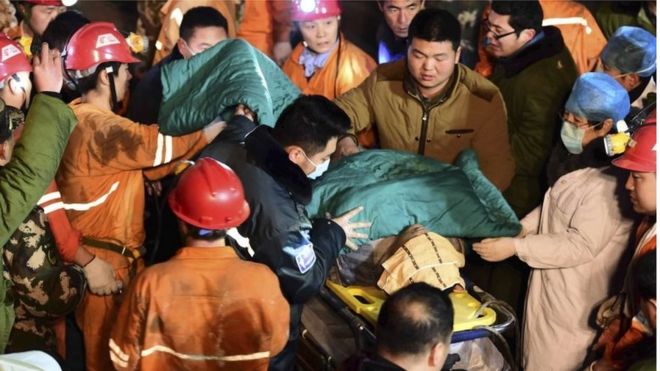