Share
Facebook Twitter LinkedIn StumbleUpon Tumblr Pinterest Reddit WhatsApp Telegram Share via Email Print
Share
Founder Zahroun Alloush, 44, was among those killed when rockets hit a meeting place, rebels and the Syrian army said.
The Saudi-backed Islamist group is one of the biggest factions and is dominant in the Eastern Ghouta countryside.
It recently joined an opposition summit in Riyadh which produced a framework for peace talks with the government.
Ten rockets struck as Jaysh al-Islam commanders met, Saudi-funded al-Arabiya TV reported. The group’s deputy leader was also killed, al-Arabiya said.
The killing of Zahran Alloush comes days after the UN passed a resolution endorsing a path to peace in Syria.
It sends a strong message as to whom the Russians and the Syrian government are willing to sit at the negotiating table with, when and if peace talks take place.
Russia, President Assad’s strong ally, has presented a list of rebel groups it identifies as terrorists. Jaysh al-Islam was one of them.
Jaysh al-Islam controls most of the Eastern Ghouta agricultural belt on the edge of Damascus.
It succeeded in forcing so-called Islamic State out of the area, which has been under heavy bombardment from the regime since early on in the war. 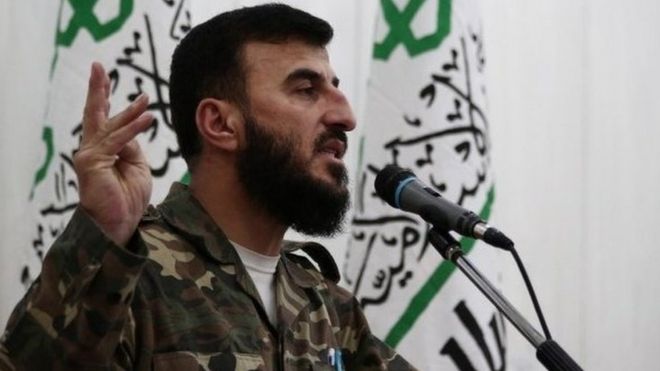