Share
Facebook Twitter LinkedIn StumbleUpon Tumblr Pinterest Reddit WhatsApp Telegram Share via Email Print
Share
The Airbus A-321 had just left the Red Sea resort of Sharm el-Sheikh, bound for the Russian city of St Petersburg.
Wreckage was found in the Hasana area and bodies removed, along with the plane’s “black box”. An official described a “tragic scene” with bodies of victims still strapped to seats.
Egypt’s prime minister said no “irregular” activities were to blame.
Sinai has an active militant network, and on Saturday afternoon, jihadis allied to the so-called Islamic State made a claim on social media that they brought down flight KGL9268.
But Russian Transport Minister Maksim Sokolov told Interfax news agency that “such reports cannot be considered true”. No evidence had been seen that indicated the plane was targeted, he said.
Egypt’s civilian aviation ministry said the plane had been at an altitude of 9,450m (31,000ft) when it disappeared.
Security experts say a plane flying at that altitude would be beyond the range of a shoulder-launched surface-to-air missile (Manpad), which Sinai militants are known to possess.
But the German carrier Lufthansa said it would avoid flying over Sinai “as long as the cause for today’s crash has not been clarified”. On Saturday evening, Air France said it was following suit.
British Airways and easyJet said their routes were regularly reviewed, but that they had no plans to alter their routes to and from Sharm el-Sheikh.
Russian President Vladimir Putin has declared Sunday a day of mourning.
He has ordered an official investigation into the crash of the flight, and for rescue teams to be sent to the crash site.
Egyptian officials said 214 of the passengers were Russian and three Ukrainian.
Russian authorities say the plane was carrying 217 passengers, 138 of them women and 17 children aged between 2 and 17. Most were tourists. There were seven crew on board.
A criminal case had been opened against the airline, Kogalymavia, for “violation of rules of flight and preparation for them”, Russia’s Ria news agency reported.
Yulia Zaitseva said her friends, newlyweds Elena Rodina and Alexander Krotov, were on board.
“We were friends for 20 years,” she told AP at a hotel where relatives were meeting near Pulkovo airport in St Petersburg.
‘Live flight tracking service Flight Radar 24’s Mikail Robertson says the plane started to drop very fast, losing 1,500 metres in one minute before coverage was lost.
Egyptian aviation official Ayman al-Mukadem said the pilot had reported technical difficulties before the plane went missing, the Associated Press reported.
Local weather observations in the vicinity of the rescue scene suggest relatively benign conditions’. 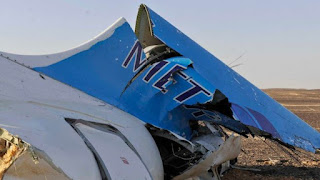