Share
Facebook Twitter LinkedIn StumbleUpon Tumblr Pinterest Reddit WhatsApp Telegram Share via Email Print
Share
It is 20 years since Alanis Morissette released “Jagged Little Pill,” the album that rocketed her to fame, but the Canadian singer can still remember it like it was yesterday.
Back in 1995, her third studio album was expected to sell only modestly, until a Los Angeles rock radio station started playing the angst-ridden first single “You Oughta Know.”
The next day “there was a line-up around the block and there were people singing ‘You Oughta Know’ way louder than I was and I just thought ‘Oh. This is no longer mine. This has been given away,'” Morissette told Reuters.
“And then I just felt like I was meeting all these new creatures and animals and human beings that had a lot of opinions and a lot of reputability so I actually felt less alone.”
“Jagged Little Pill” went on to sell some 33 million copies and brought Morissette four Grammy awards. The 20th anniversary collector’s edition, to be released on Friday, includes 10 previously unreleased demo tracks, a concert video from her live British debut, and an essay by the singer reflecting on that era.
Morissette had been making records since she was 11 years old, but the album and its string of emotion-filled hit singles established her as one of the leading alternative rock female singer-songwriters of the day.
Morissette, now 41, married and with a young son, said having millions of people listening to her innermost thoughts was not as scary as she thought it would be.
“Every record that I put out, every song and every single, I’d wake up at 4 in the morning the night before it was released. I’d be gripped with terror and each time it would become less and less so. And I just realized the more transparent I was, the more empowered I felt,” she said.
As for her famous 1996 single “Ironic,” which was attacked because its lyrics were decidedly un-ironic, Morissette has no regrets.
“I didn’t realize the degree of which the malapropism would trigger this furor. I think people are up in arms about the idea of being stupid and I’m perfectly aware that there’s a big part of me that’s very very dumb and very very brilliant – it depends when you catch me – so I don’t personally care but I can see it’s a big deal for people,” she said. 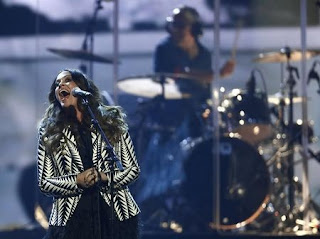