Share
Facebook Twitter LinkedIn StumbleUpon Tumblr Pinterest Reddit WhatsApp Telegram Share via Email Print
Share
The boat carrying 27 people sank near Tofino on Vancouver Island, the coastguard said. Sea conditions at the time were reported to be calm.
Emergency officials said 21 people had been rescued and one other person was still missing.
The nationalities of the victims are not yet known.
The boat, Leviathan II, made a mayday call late on Sunday afternoon before sinking, the Joint Rescue Co-ordination Centre said.
The agency’s spokesman, Lt Cmdr Desmond James, said the search for the missing person would be taken over by the Royal Canadian Mounted Police.
Valerie Wilson, of the Vancouver Island Health Authority, told the Associated Press (AP) news agency that the survivors had been admitted to Tofino General Hospital, and three of them had since been transferred elsewhere.
The first rescue boats to arrive belonged to the nearby Ahoushat First Nation community, aboriginal councillor Tom Campbell said.
He said he saw the first survivors brought ashore.
“Their looks tell the whole story,” he told AP. “You can’t describe looks on people that are lost. They look totally lost – shocked and lost.”
Canadian broadcaster CBC said the boat appeared to have sunk some distance from the shore.
The 20m (65ft) boat was operated by Jamie’s Whaling Station and Adventure Centres. 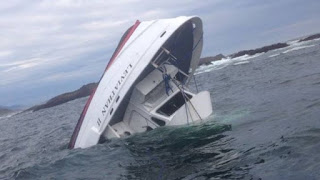