Share
Facebook Twitter LinkedIn StumbleUpon Tumblr Pinterest Reddit WhatsApp Telegram Share via Email Print
Share
There has been a high turnout at voting stations, reports say.
Opinion polls have put the governing Chama Cha Mapinduzi (CCM) party ahead, but the result is expected to be close.
Four opposition groups are backing one candidate, a former prime minister, in the presidential race.
The BBC’s Tulanana Bohela reports from the main city Dar es Salaam that usually busy streets and markets are deserted, and large queues have formed at polling stations as people wait patiently to cast their ballots.
President Jakaya Kikwete, who is standing down after two terms, has called for peace ahead of the election, adding that “anyone who tries to cause trouble will be dealt with”.
CCM was formed in 1977 from a merger of two post-colonial parties and has effectively been in power since independence in 1961.
It has fielded Works Minister John Magufuli, 55, as its presidential candidate.
He is being challenged by Edward Lowassa, 62, who quit CCM after he failed to win its presidential nomination.
He is contesting the poll under the banner of the Ukawa coalition.
Both candidates have already cast their ballots.
“I’ve carried out my duty as a citizen by voting. My appeal to those Tanzanians who have not voted is to ensure they do so to elect the people they want,” Mr Magufuli said.
Mr Lowassa said he was confident of victory, and urged people to vote peacefully.
The unusually high turnout across the country suggests that Tanzanians believe the future is in their hands.
This is in contrast to previous elections when CCM was certain of victory because of a weak and divided opposition.
But politics has been shaken up by the formation of the Ukawa coalition, which believes it has a real chance of winning.
The CCM is equally confident, setting the stage for the most competitive election since independence from British rule.
Tanzanians are hoping that by Monday final results will be out, and they will know who their next president will be. 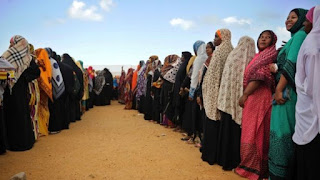