Share
Facebook Twitter LinkedIn StumbleUpon Tumblr Pinterest Reddit WhatsApp Telegram Share via Email Print
Share
President Abdulla Yameen narrowly escaped injury when a blast struck the boat he was using to return home from the airport late last month.
In recent years, the Maldives has been rocked by political infighting.
Mr Yameen’s election has been the subject of drawn-out wrangling.
Security has been tightened in the capital Male amid fears of “turmoil” triggered by the arrest, says the Maldivian newspaper Haveeru.
“By early morning Saturday, lorries loaded with policemen and soldiers were seen on nearly every street,” it reports.
Authorities said initially the blast could be a result of a mechanical failure.
But they announced later the blast was an attempt to assassinate Gayoom and launched a criminal investigation. The device was placed under the seat usually occupied by the president, who escaped unhurt because he was not sitting there, the government said.
Adeeb has denied that he was linked to the explosion, the AP news agency reported.
Adeeb was a staunch Gayoom loyalist and became the vice president in July at the age of 33. Gayoom was instrumental in promoting Adeeb from tourism minister after the president got his lawmakers in parliament to impeach the previous vice president, Mohamed Jameel.
Lawmakers also lowered the minimum age for president or vice president from 35 to 30 to enable Adeeb to take the position.
Weeks after the blast, however, it was apparent that Gayoom suspected his vice president was involved, orchestrating a series of raids on homes and businesses of Adeeb’s associates.
Gayoom also sacked his defense minister and the police commissioner after the blast.
“At the moment the country is without a defence minister or chief of police, and now it seems (it will lose) its vice president because there has been a huge reshuffle after the explosion,” Bosley added. 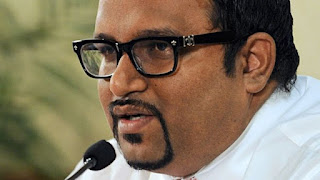