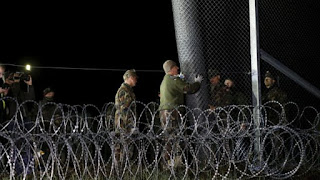 Hungary closed its Croatia frontier on Friday and now says it is reintroducing controls on its Slovenia border.
Many of the migrants aim to continue north to Austria and Germany.
Nearly 600,000 migrants have reached the EU by sea so far this year, many travelling from Turkey to Greece.
However more than 3,000 have perished trying to cross the Mediterranean. Many migrants are Syrians fleeing the civil conflict there.
Hungary said it shut the border with Croatia after European Union leaders failed to agree its plan to send a force to prevent migrants reaching Greece.
Hungary’s closure of its border with Croatia comes just a month after it shut its frontier with Serbia, which was another transit route to Western Europe.
Hungarian Foreign Minister Peter Szijjarto said border controls with Slovenia would be temporarily reinstated to safeguard Hungary from a “mass wave of unidentified, uncontrolled migrants.”
Hungary and Slovenia are both part of the passport-free Schengen zone, but Croatia is not.
The quiet Croatian town of Cakovec is preparing for a new role – as a railhead for refugees.
Thousands of them are expected to come through here in the coming days, following Hungary’s completion of a fence along its border with Croatia. Now as many as 5,000 people a day will have to use an alternative route into the Schengen area.
They will arrive by train from reception areas close to Croatia’s border with Serbia. Then they will be split into groups. Some will go by bus to the border crossing with Slovenia at Macelj. But the majority will travel on by train to another crossing at Sredisce ob Dravi.
Red Cross and UNHCR workers welcomed those who arrived on Saturday afternoon – as an already long journey has become that little bit more complicated.
Until Friday night, 5,000 to 8,000 people were being allowed across Hungary every day, without registration, bound for Austria.
There are fears in Slovenia, a nation of some two million people, that the latest border closure will channel many more migrants through the country.
Extra police had been deployed to the border with Croatia, Slovene Interior Minister Vesna Gjorkos Znidar said.
But the country will keep accepting refugees as long as Austria and Germany’s borders remain open, she said.