Share
Facebook Twitter LinkedIn StumbleUpon Tumblr Pinterest Reddit WhatsApp Telegram Share via Email Print
Share
The signing ceremony in the capital, Nay Pyi Taw, was the culmination of two years of peace talks.
But the most active rebel groups have stayed out of the deal – seven of the 15 groups involved in negotiations.
Myanmar, also known as Burma, has been engaged in armed conflict with various groups seeking greater autonomy since independence from the British in 1948.
The government hopes Thursday’s deal will be the first step on a path to a lasting political settlement.
Among the groups which have not signed are the largest armed group, the United Wa State Army (UWSA), and the Kachin Independence Organisation (KIO), whose Kachin Independence Army (KIA) controls large areas of north-eastern Kachin state and regularly clashes with the Burmese army.
The agreement is neither truly “nationwide” nor strictly speaking a ceasefire.
In order to take part in this collective agreement the armed groups had to have previously signed a bilateral ceasefire with the government. So it is not actually halting any conflicts.
This at times tortuous process has been about trying to get everyone to the start line before the next phase, political dialogue, gets underway.
With only about half the groups having made it to the start line, the way forward from here will be ever more complex.
Political discussions are now due to begin within months on the structure of a new, and likely more federal, system of government, says our correspondent.
But there are still concerns that peace with the groups signing Thursday’s agreement could be short lived, if the Burmese army ignores the ceasefire, as it has with others.
Earlier this week, all of the groups signing were removed from the government’s list of “unlawful associations”, a step towards bringing them into mainstream politics. 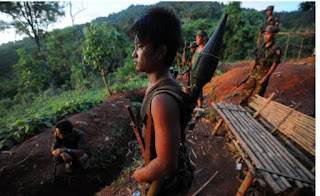 President Barack Obama extend the US military presence in Afghanistan