Ms Cafferkey, 39, was readmitted to a specialist isolation unit at the Royal Free Hospital in London last week.
The hospital said in a statement that her condition had deteriorated.
Ms Cafferkey contracted Ebola while working at a treatment centre in Sierra Leone last year.
She spent almost a month in isolation at the Royal Free at the beginning of the year after the virus was detected when she arrived back in the UK.
She was later discharged after apparently making a full recovery, but it was discovered last week that Ebola was still present in her body.
Bodily tissues can harbour the Ebola infection months after the person appears to have fully recovered.
A statement released by the hospital on Tuesday said: “We are sad to announce that Pauline Cafferkey’s condition has deteriorated and she is now critically ill.
“She is being treated for Ebola in the high level isolation unit at the Royal Free Hospital.” 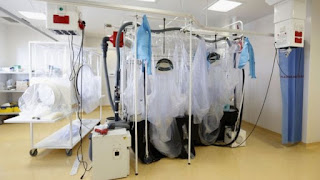