Share
Facebook Twitter LinkedIn StumbleUpon Tumblr Pinterest Reddit WhatsApp Telegram Share via Email Print
Share
TV footage shows scenes of panic and people lying on the ground covered in blood, amid protest banners.
The blasts took place near the city’s central train station as people gathered for a march organised by leftists groups.
The pro-Kurdish HDP party was among those attending the rally.
Government officials say the blasts were a terrorist attack and are investigating reports that a suicide bomber was behind at least one of the explosions. 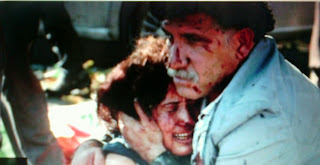