Share
Facebook Twitter LinkedIn StumbleUpon Tumblr Pinterest Reddit WhatsApp Telegram Share via Email Print
Share
Thousands of curiosity seekers lined up in the blustery, dark Chicago Botanic Garden on Tuesday night to catch a rare glimpse of a 4-1/2-foot (1.4-meter) tall corpse flower in full bloom, but not in full stench.
The garden in a north Chicago suburb planned to stay open until 2 a.m. on Wednesday to let the crowds see the blooming corpse flower – properly known as the titan arum or Amorphophallus titanum – during the 24 to 36 hours it is expected to stay in bloom.
Titan arum flowers typically stink like rotting flesh when they bloom. The smell is aimed at attracting pollinators that help it reproduce.
However, evening visitors to the first titan arum ever to bloom in the Chicago area were relieved, or maybe disappointed, that the stench had dissipated over the day.     “It wasn’t as smelly as we thought,” said Hanam Tran, a 30-year-old administrator who stood in line for an hour with his mother and another relative to see the pale-green, phallus-shaped plant with a frilly, dark red bloom around the bottom.
The titan arum, dubbed Alice, surprised experts when it suddenly bloomed this week. Another titan arum at the garden, Spike, failed to bloom after weeks of anticipation this past summer. A Spike webcam drew 350,000 views and prepared the public and garden staff for Alice.
“We were certainly all disappointed with Spike not opening a month ago. However we were able to learn a lot,” said Tim Pollak, the outdoor floriculturist who has worked for 12 years to bring one of the garden’s eight titan arum’s to this stage.
Mike Sarchet, 23, a consultant who visited Alice with a friend, said he had watched and waited in vain for Spike to bloom.
“Then I saw on Facebook today that this one surprise bloomed and I said ‘we have to go right away after work’,” Sarchet said.     The Botanic Garden had seven experts on hand to explain the bloom to visitors who filed through a greenhouse.    Pollak said Alice lived up to her corpse flower name early in the morning, giving off a horrendous stink that faded later in the day.
Titan arums are native to the Indonesian rainforest and typically take 10 years to bloom, and then die.
Some of Alice’s pollen – which can be frozen for up to two years – will be donated to other gardens with rare titan arum plants. 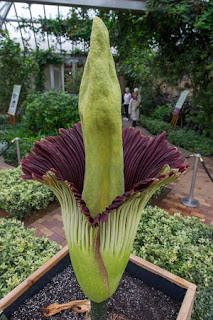