Share
Facebook Twitter LinkedIn StumbleUpon Tumblr Pinterest Reddit WhatsApp Telegram Share via Email Print
Share
The Russian president showed up at the United Nations on Monday for the first time in a decade, proposing a coup against U.S. global leadership and seeking to wrest control of a coalition battling ISIS away from America’s grip.
And he wasn’t the only leader of a country challenging the United States to effectively upstage Obama at the annual global meeting, which a U.S. president traditionally uses to command the spotlight.
Speeches by Chinese President Xi Jinping and Iranian President Hassan Rouhani on the 70th anniversary of the creation of the world body also left Obama defending not only his personal foreign policy legacy, which is already under assault at home from Republican presidential candidates, but the entire concept of a world order based on seven decades of U.S. global leadership.
The day of speech-making, which also included an address by Cuban leader Raul Castro and Egyptian President Abdel Fattah el-Sisi, underscored the multipolar challenges to U.S. power, as slumbering empires seek a resurgence and America faces military challenges from Eastern Europe across the Middle East to Asia.
Obama has embraced a policy of encouraging other actors to address threats in their region, for instance pulling Saudi Arabia and Jordan into the coalition to fight ISIS. But the approach means that other forces joining the fray — including Iran and now Russia in Syria — may not necessarily agree with America’s preferred end game.
Obama offered a full-throated justification of his policies — particularly emphasizing diplomacy over the use of force — in his own U.N. address, but he seemed on the defensive amid claims by critics that his policies have emboldened U.S. adversaries.
The most ardent challenger on Monday was Putin, who appears to be probing openings in Ukraine and Syria where he believes the U.S. president will not resist. He recently ordered a military buildup in Syria apparently in support of President Bashar al-Assad, a longtime Russian client, and went behind Washington’s back to conclude an anti-ISIS intelligence alliance with Iran, Syria and Iraq just this weekend.
Russia criticize over U.S
Putin’s message at the U.N. podium Monday was a simple one: U.S. interventions and unilateralism have backfired in the Middle East, and it is time to try something new.
His speech will do little to undercut a widespread impression in many Western capitals that his aim in Syria is not just to bolster a Moscow ally but, primarily, to thwart U.S. power and influence in the Middle East.
Putin took particular aim at U.S. involvement in Iraq and Libya, which he said fostered a power vacuum filled with “extremists and terrorists.”
“Do you realize now what you’ve done?” he asked.
He called for a ministerial conference and then a U.N. resolution to reorient strategy against ISIS — even though many U.S. observers believe his real aim is to prioritize attacks against rebels opposed to al-Assad and to thwart U.S. aspirations in a region in which Obama has shown little appetite of becoming embroiled. 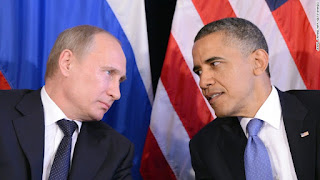