Share
Facebook Twitter LinkedIn StumbleUpon Tumblr Pinterest Reddit WhatsApp Telegram Share via Email Print
Share
Militants are attacking from several directions and are reported to have briefly entered a hospital. There are casualties on both sides, police say.
Kunduz province has seen a number of attacks since April, with the Taliban joining forces with other insurgents.
The assault comes a day after a bomb attack on a sports match in the eastern Paktika province killed nine people.
Monday’s attack in Kunduz appears to be one of the most significant mounted on a provincial capital by the Taliban, correspondents say.
Kunduz is symbolically significant to the Taliban as it was their former northern stronghold before their government was overthrown in 2001.
The Taliban say they have entered a hospital in Kunduz, however local media reports say that they only stayed briefly.
Pictures on social media appeared to show fighters taking selfies inside the hospital.
Kunduz police spokesman Sayed Sarwar Hussaini told Reuters news agency: “Heavy fighting is ongoing in Khanabad, Chardara and at Imam Sahed, the main entrances to the city. We have enough forces and will drive them out.”
He said that 20 militants had died in the clashes, with an unconfirmed number of casualties in the Afghan security forces.
Kunduz province contains major roads that connect central and northern Afghanistan, including a road to the capital Kabul.
Correspondents say it also supplies half of Afghanistan’s rice crop.
Militant violence has increased across Afghanistan since the departure of most US and Nato forces last year.
On Sunday, a bomb attack on a sports ground in Paktika left nine dead and dozens injured. No group has said it carried out that attack.
Also on Sunday, 300 fighters allied to the so-called Islamic State attacked checkpoints in Nangarhar.
Two policemen were reported killed in the assault, while local officials said 60 militants were killed. 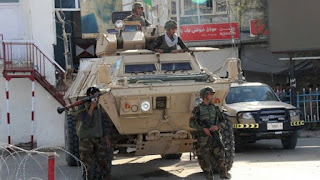 Russia wants 'co-ordination' against IS