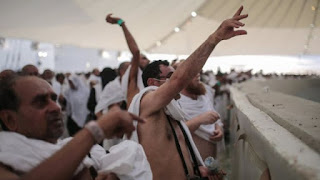 Another 450 people were injured in the incident at Mina, which occurred as two million pilgrims were taking part in the Hajj’s last major rite.
They converge on Mina to throw stones at pillars representing the devil.
Preparations for the Hajj were marred when a crane collapsed at Mecca’s Grand Mosque this month, killing 109 people.
The Saudi civil defence directorate said on Twitter that 4,000 personnel had been sent to the scene of Thursday’s stampede, along with more than 220 emergency and rescue units. The injured are being taken to four hospitals in the area.
It was not immediately clear what triggered the stampede, but it is not the first to have occurred during the Hajj.