Share
Facebook Twitter LinkedIn StumbleUpon Tumblr Pinterest Reddit WhatsApp Telegram Share via Email Print
Share
Peyton Manning became the second NFL quarterback to surpass 70,000 career passing yards as he warded off predictions of his demise with a dramatic performance on Thursday.
Manning tossed for 256 yards and three scores, including the game-tying throw with 36 seconds left, as the Denver Broncos stunned the Kanas City Chiefs 31-24.
With the game tied 24-24 and seemingly headed to overtime, Kansas City running back Jamaal Charles fumbled a run and Denver’s Bradley Roby returned it 21 yards for the winning score.
That made it a triumphant night for 39-year-old Manning who has shown his age of late with reduced arm strength and is facing increasing scrutiny about his performance.
Manning, who has admitted to still feeling effects from neck surgery four years ago that cost him an entire year, failed to throw for a touchdown or exceed 200 yards in a season-opening win Sunday that sounded off alarm bells.
The five-time league MVP looked equally ineffective early on against the Chiefs. Manning was sacked three times on the night and had an interception returned for a touchdown that gave Kansas City a 14-0 lead.
Gradually, Manning returned to form and threw a pair of TDs in the second quarter.
In the third, Manning connected with wide receiver Emmanuel Sanders to reach a milestone only achieved by Brett Favre. Favre is the all-time leading passer in NFL history with 71,838 yards but Manning is now nipping at his heels with 70,122.
More importantly, Manning has led the Broncos to a 2-0 start, signaling that talk of his expiration may be exaggerated.
“That’s two weeks in a row now we’ve had final drives that put a stamp on the game,” Manning said. “We’ll keep chipping away.” 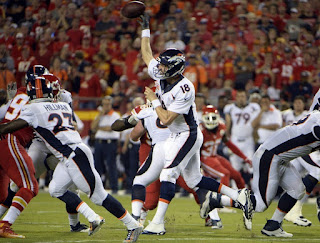