Share
Facebook Twitter LinkedIn StumbleUpon Tumblr Pinterest Reddit WhatsApp Telegram Share via Email Print
Share
When Grace’s five-year-old daughter was admitted to hospital in Kenya with a chest infection, she didn’t suspect HIV.
It was only four years later, when Grace became so ill she had to be carried to hospital, that she found they were both HIV positive.
The pair now receive free, world-class treatment at one of the capital’s top private hospitals.
Most of the 3,000 patients at Mater Hospital’s Comprehensive Care Clinic, dedicated to HIV/AIDS treatment, come from nearby shanty towns. It is entirely donor funded, mainly by the United States President’s Emergency Plan for AIDS Relief (PEPFAR).
“If I hadn’t come here I would be dead,” said Grace, a 32-year-old single mother from Nairobi’s Fuata Nyayo slum, who declined to give her full name.
Earmarked funding from donors like PEPFAR and the Global Fund to Fight AIDS, Tuberculosis and Malaria has benefited millions of people like Grace.
In Kenya, HIV prevalence among adults has almost halved since the mid-1990s to 5.3 percent in 2014, according to UNAIDS.
Around 60 percent of Kenya’s annual $1.25 billion health budget is spent on HIV/AIDS, the Thomson Reuters Foundation calculated, using government and UNAIDS figures. Of that, about three quarters comes from international sources, UNAIDS says.
Yet HIV/AIDS remains the leading cause of death in Kenya, responsible for nearly three in 10 deaths in the east African country, where 1.6 million Kenyans are infected, government data in 2014 shows.
The disproportionate focus on HIV/AIDS has come at the expense of other diseases and the wider health system struggling to reach people in slums and remote arid regions, experts say.
“We should have tackled the reproductive health issues and HIV together,” said one Kenyan working with an HIV charity who declined to be named. “HIV got a momentum and… the rest… got forgotten.”
STRONGER HEALTH SYSTEM
The new U.N. Sustainable Development Goals (SDGs), due to be agreed by world leaders later this month, seek to build on the Millennium Development Goals by reducing maternal mortality and ending the AIDS, tuberculosis and malaria epidemics by 2030.
One goal is universal health coverage – good quality, affordable health services for all – and greater recruitment, training and retention of health workers.
If Kenya and other developing countries are to meet the SDGs, they need to shift investment away from diseases like HIV and towards strengthening health systems, experts say.
Although maternity, under-five and emergency services are nominally free in Kenya, cash-strapped government facilities are overstretched, forcing patients to buy their own medicines.
Grace and her daughter had to sleep on the floor when they were admitted to Nairobi’s government-run Mbagathi Hospital because all the beds were full.
Patients have died because of an ongoing strike by nurses over non-payment of salaries, according to local media reports. Staff morale is low and patients often complain of abuse.
To build a better health system, Kenya must prioritize preventative and primary level care and eliminating wasteful systems, experts say.
Half of Kenya’s health budget is wasted through inefficiency and corruption, said Peter Kimuu, head of the health ministry’s Directorate of Policy, Planning and Health Care Financing.
Globally, the World Health Organization (WHO) estimates that 20 to 40 percent of health budgets is wasted.
“The agenda in the next 10 to 15 years is really… the efficiency agenda rather than the revenue-raising agenda,” said Joseph Kutzin, a WHO expert on health financing.
For example, a nutritionist hired to advise people with HIV on their diets could also be employed to counsel diabetic patients and pregnant women.
EBOLA
On the donor side, funders need to focus more on the long-term health picture and become more flexible in their funding, analysts say.
“When there is a crisis, everybody is mobilized … It’s very easy to get money,” said the United Nations’ resident and humanitarian coordinator in Kenya, Nardos Bekele-Thomas.
Around 70 percent of U.N. spending in Kenya between 2009 and 2013 was on emergencies, such as hunger and displacement caused by drought, poverty and conflict.
“There is nothing to show (for it),” she said. “We have to mobilize this energy and resources for preventing crises.”
Reform is under way.
In Kenya, PEPFAR is phasing out Kenya Pharma, a parallel procurement system set up by U.S. development agency USAID, to deliver HIV drugs. Instead, it is investing in the Kenyan government’s supply chain.
Yet problems persist.
Some 60 percent of Kenya’s donor support is off-budget, the health ministry’s Kimuu said, which means it is spent on items that are not in the government five-year health sector strategy.
“Many donors will not give money to support that strategy,” said Kimuu. “They will come and set their own projects.”
Where there is corruption, it is easier for donors to track spending and achieve their targets via standalone programs.
GAME CHANGER
Universal health coverage could be a catalyst in improving health indicators among poor, forgotten populations.
Globally, over 1 billion people cannot access the healthcare they need, and 100 million are pushed into poverty each year due to “catastrophic” spending on medical care, the WHO says.
In Kenya, 37 percent of healthcare is funded by patients, which hits the poor hardest, 35 percent by donors and 28 percent by government, the government says.
It plans to introduce compulsory health insurance which would entitle Kenyans to a package of services from 4,000 public or 6,000 private health facilities, Kimuu said.
Government medical centers would have an incentive to improve their services as they would be paid according to the number of patients they treated, he added.
Without a shift in focus to primary healthcare interventions such as vaccination campaigns, the SDG targets will not be met.
“We see a lot of preventable illnesses … things that with a bit of public awareness and education would not be in hospital,” said Mercy Korir, a doctor, who estimates that such cases account for two-thirds of medics’ caseload.
($1 = 104.1000 Kenyan shillings) 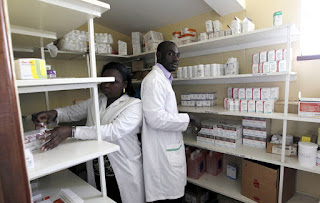