Share
Facebook Twitter LinkedIn StumbleUpon Tumblr Pinterest Reddit WhatsApp Telegram Share via Email Print
Share
Kuwait’s Zain will investment more in technology firms in parallel industries and is considering buying into two digital advertising companies, the telecom operator’s chief executive said on Monday.
Zain, like many Gulf telecoms operators, has suffered as subscriber growth stagnated and replacement services such as instant messaging and Internet-based calls replaced higher-margin text messages and conventional phone calls.
These trends prompted Zain to seek partnerships and stakes in web-based companies. Last week, it announced a link-up with Uber Technologies Inc [UBER.UL] and has also invested in three venture capital funds focusing on digital services.
“It’s not about financial gain, (these) give us easier access to see what the new business models look like,” Scott Gegenheimer, Zain Group chief executive, told a conference in Dubai. “They’re more agile than a lot of the telecom operators. We don’t have the time and skill sets to do this in house.”
He said Zain was interested in “smart city” initiatives, online advertising and television services.
“Digital advertising could be interesting – we’re looking at two companies right now,” said Gegenheimer.
Data provides about a fifth of Zain’s revenue and this proportion is likely to increase.
“The amount of data we’re giving away in our packages is not sustainable in the long run. In Europe, the U.S., the price for 1 or 2 gigabytes is the same as you pay in Saudi Arabia for 500 gigabytes,” said Gegenheimer.
“We have to get some of these packages under control … because (otherwise) you’re not going to be able to monetize the data.”
Zain, Kuwait’s top mobile company by subscribers, has operations in eight countries including Sudan, Iraq and Saudi Arabia.
Its Sudan division, which accounts for a quarter of Zain’s customers and a fifth of revenue, made a half-year net profit of $78 million, up 30 percent year-on-year. That ended a sustained earnings slump and Gegenheimer attributed the turnaround to a more stable Sudanese pound and easing local inflation.
“We’ve hedged a lot of our loans so don’t have as much problem as before,” Gegenheimer said.
Sudan’s inflation rate slowed to 11.3 percent in August from 14.1 percent in July. 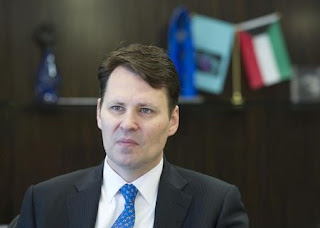