Share
Facebook Twitter LinkedIn StumbleUpon Tumblr Pinterest Reddit WhatsApp Telegram Share via Email Print
Share
Euro zone industrial production was stronger than expected in July, data showed on Monday, pointing to steady third quarter economic growth if the trend holds.
Industrial output in the 19 countries sharing the euro rose 0.6 percent month-on-month for a 1.9 percent year-on-year gain. Economists polled by Reuters had expected a 0.3 percent monthly rise and a 0.6 percent annual gain.
Eurostat also revised up data for June to a 0.3 percent monthly fall from a decline of 0.4 percent and to a 1.5 percent year-on-year rise from the previously reported 1.2 percent.
“A decent gain of 0.6 percent month-on-month in July lifts hopes that industrial production can make a significant contribution to euro zone growth in the third quarter,” said Howard Archer, economist at IHS Global Insight.
Morgan Stanley economist Elga Bartsch said the output number alone pointed to economic growth in the third quarter of 0.2 percent quarter-on-quarter, below the 0.4 percent growth in the second quarter.
“However, based on data for July and August, our soft data indicator based on traditional business surveys and our PMI indicator are pointing to balanced risks,” Bartsch said.
“We do expect weaker sentiment in September though, reflecting growth risks in emerging markets and in particular China, as well as recent financial market turbulences,” she said.
The July numbers were mainly driven by a 3.0 percent monthly rise in the output of energy, 1.4 percent higher volume of capital goods production and a 1.3 percent increase in the output of durable consumer goods.
The sharp increase was probably due to a heatwave, notably at the start of July, when air conditioning was on overdrive, and some economists were skeptical about whether the output growth trend would hold.
“July’s rise in industrial production merely offset the declines in the previous two months, so is not the beginning of a stronger upward trend in the sector,” said Jack Allen, economist at Capital Economics.
“The survey evidence points to fairly sluggish growth over the rest of the year,” he said. 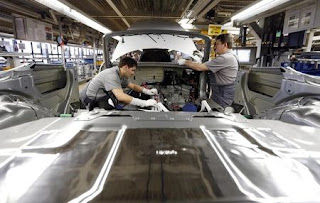 Abbott loses out Australia to get new PM.