Share
Facebook Twitter LinkedIn StumbleUpon Tumblr Pinterest Reddit WhatsApp Telegram Share via Email Print
Share
Stephen Colbert brought a mix of politics, patriotism and Hollywood glamor to his debut hosting the CBS “Late Show” on Tuesday, opening with the national anthem and bantering with George Clooney and Republican White House contender Jeb Bush.
Nine months after his final sign-off from “The Colbert Report” on cable television’s Comedy Central channel, Colbert launched his first major network broadcast as the late-night heir to David Letterman, taking a moment to pay tribute to his predecessor.
With CBS Corp President and CEO Leslie Moonves seated in the front row of the studio audience, Colbert vowed to honor Letterman’s comedy achievements “by doing the best show we can and occasionally making the network very mad at us.”
As he promised for the occasion, Colbert shed the well-worn persona of the pompous, ultra-patriotic political commentator that he played for nearly a decade on “The Colbert Report” and as a regular before that on “The Daily Show with Jon Stewart.”
Instead, CBS viewers and his live audience inside the newly remodeled Ed Sullivan Theater in Manhattan, were treated to an extended glimpse of the “real” Colbert.
He jokingly explained the difference during an interview with Bush, when the former Florida governor made mention of the numerous images of Colbert gracing the stage.
“I used to play a narcissistic conservative pundit,” the 51-year-old performer told Bush. “Now, I’m just a narcissist.”
Pressed by Colbert to explain his “Jeb!” campaign logo, Bush, who has been ridiculed as a “low-energy” candidate by rival Donald Trump, replied: “It connotes excitement.”
In an earlier interview with Clooney, Colbert presented the actor-director with a belated wedding gift for his marriage last year to human rights lawyer Amal Alamuddin, acknowledging that he was not invited to the nuptials because the two men are not well acquainted personally. The present was a Tiffany paperweight inscribed with the phrase, “I don’t know you.”
NATIONAL ANTHEM AND STEWART CAMEO
Colbert launched his first episode of the hour-long show with a pre-taped string of video clips of himself singing “The Star Spangled Banner” in various locations, including a bowling alley, a machinist shop and a baseball field. The montage ended with Jon Stewart, barely recognizable in a grizzled beard, making a cameo appearance by lifting off an umpire’s mask to shout, “Play ball!”
From there, the camera cut to Colbert bounding on stage to a standing ovation from the studio audience and chants of “Stephen, Stephen, Stephen” – a ritual familiar from his days on “The Colbert Report.”
Even before the Bush interview, Colbert showed his penchant for mining laughs from politics.
After his opening standup monologue, Colbert segued into a lengthy routine in which he simultaneously binged on a bag of Oreo cookies and on video clips of Trump, who has vowed never to eat Oreos again after snack-maker Nabisco Inc said it was opening a new plant in Mexico.
In a gag edited out of the broadcast but posted online, Colbert got Bush to recite some “Trumpier” talking points suggested for their next presidential debate, including the line: “I will build a wall between the United States and Iran, and make Mexico pay for it.”
It remains to be seen whether Colbert’s succession of Letterman, for whom “Late Show” was created in 1993, will bring about a ratings realignment of the late-night TV scene.
Colbert faces an uphill climb if he hopes to overtake NBC counterpart Jimmy Fallon and the decades-long dominance of “The Tonight Show.” Likewise, he will have to work hard to hold his own in the rankings against No. 3 ABC’s “Jimmy Kimmel Live!”
Fallon made his own brief “Late Show” cameo by video feed on Tuesday as the two hosts compared guest lists and Fallon wished Colbert “a great show,” adding, “See you in the locker room.”
It was hard to imagine their predecessors, Letterman and his arch rival Jay Leno, ever sharing a similar moment. 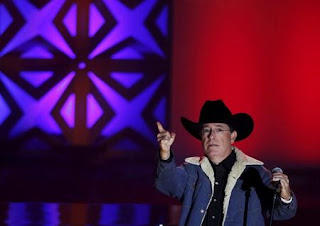 The throne of 'Ooni of Ife' Tradition Must Be Observed.