Share
Facebook Twitter LinkedIn StumbleUpon Tumblr Pinterest Reddit WhatsApp Telegram Share via Email Print
Share
U.S. stocks rose more than 2 percent on Tuesday, bouncing after steep losses last week and a China-fueled rebound in global equities.
Gains were broad-based and followed a three-day U.S. holiday weekend. All but one of the 10 major S&P sectors ended with gains of more than 2 percent.
Hopes for more stimulus measures from the Chinese government increased after data on Tuesday showed that China’s imports shrank far more than expected in August, falling for the 10th straight month.
Chinese stocks surged in a late rally, sparking a rebound in global equities. Late on Monday, China said it would remove a tax on dividend incomes for investors who hold stocks for more than a year in an effort to encourage longer-term investment.
“We had some nice buying opportunities with the selloff in August, and I think people are starting to take advantage of that and put money to work,” said Larry Peruzzi, senior equity trader at Cabrera Capital Markets Inc in Boston.
“In China it seems like there is a willingness to continue with stimulus, so hopefully those markets will stabilize.”
The Dow Jones industrial average <.DJI> rose 390.3 points, or 2.42 percent, to 16,492.68, the S&P 500 <.SPX> gained 48.19 points, or 2.51 percent, to 1,969.41 and the Nasdaq Composite <.IXIC> added 128.01 points, or 2.73 percent, to 4,811.93.
All three major U.S. stock indexes posted losses of at least 3 percent for last week.
Global financial markets have been rattled in recent weeks by fears that China’s slowdown could drag on already sluggish global growth, prompting some investors to bet that the U.S. central bank will delay a hike until the end of the year.
A mixed report on the U.S. jobs market for August on Friday added to investor uncertainty about whether the Federal Reserve will increase interest rates at its Sept. 16-17 meeting.
Apple shares gave the biggest boost to the S&P and the Nasdaq, rising 2.8 percent at $112.31, a day before the iPhone maker is expected to unveil new offerings.
Fitbit was up 11.2 percent at $35.46 after Morgan Stanley upgraded the stock to “overweight.”
Media General fell 6 percent to $10.48 after it said it would buy diversified media company Meredith Corp for about $2.34 billion to create the third-largest local TV station owner in the United States. Meredith was up 9.9 percent at $50.47.
Advancing issues outnumbered declining ones on the NYSE by 2,439 to 644, for a 3.79-to-1 ratio on the upside; on the Nasdaq, 2,202 issues rose and 646 fell for a 3.41-to-1 ratio favoring advancers.
The benchmark S&P 500 index posted one new 52-week highs and no new lows; the Nasdaq Composite recorded 46 new highs and 30 new lows.
About 6.7 billion shares changed hands on U.S. exchanges, compared with the 7.6 billion daily average for the month to date, according to data from BATS Global Markets. 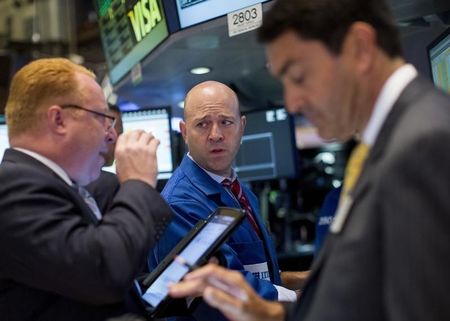